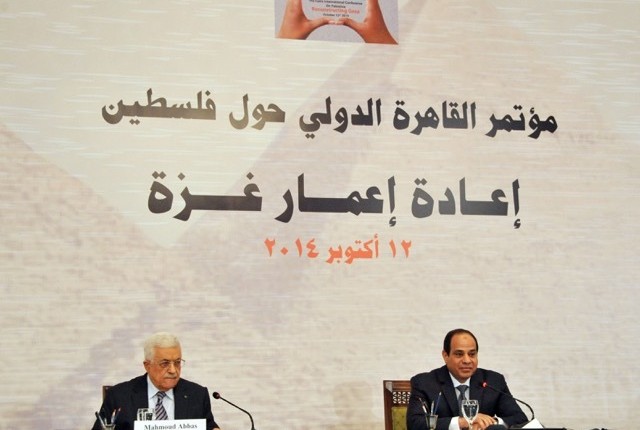 International community representatives at the Gaza Reconstruction Conference in Cairo called Sunday for a lasting solution to the Gaza conflict to avoid another turn in the cycle of destructive conflict.

President Abdel Fattah Al-Sisi reiterated Egypt’s support for Palestine as he opened the conference, emphasising to Israel that it is “time to end the conflict”.

Al-Sisi said the conference comes as part of continued Egyptian efforts to save lives, aspire to regional peace, and to fulfil the dream of Palestinian and Israeli co-existence.

Following Al-Sisi’s address, Palestinian President Mahmoud Abbas condemned Israel for breaking treaties and conventions and for continuing with ambitions to “take over” Palestine. Part of the Palestinian Authority’s (PA) goal in attending the conference is to raise $4bn to rebuild the Gaza Strip following a summer of heavy conflict.

“The Palestinian economy cannot continue to be hostage to Israel,” Abbas said.

Egypt and Norway are co-hosting the conference in conjunction with US Secretary of State John Kerry, Middle East Quarter envoy Tony Blair, and UN Secretary General Ban Ki-moon among the attendees.

Al-Sisi said reconstruction following the recent 50-day conflict, which ended on 26 August, requires permanent pacification, as well as for the PA to exercise its legitimacy.

“We must not fail the Palestinian people who put their hopes on this conference,” said Al-Sisi.

“The Palestinian issue has been and will always be the [most important] Arab issue,” he added. Al-Sisi highlighted the political role Egypt played during the conflict, as well as its humanitarian role in delivering food and medical supplies.

Abbas said that the three wars in the past six years have left over 3,600 people dead, over 18,000 injured and heavy destruction of homes and infrastructure. He promised his people to get them out of the chaotic state, saying: “Your suffering shook the conscience of the world.”

He said Palestine needs the support and funding of the international and regional communities for reconstruction and sustainable peace. He added that a sustainable solution should be reached instead of holding conferences every two years.

US Secretary of State John Kerry announced an additional $212m in aid to the Palestinian people during the conference, while Qatar pledged a $1bn donation. French Foreign Minister Laurent Fabius said that Paris will provide €30m to the PA in the form of projects until 2017.

EU representative Catherine Ashton said the region’s political situation needs to be solved in a wider framework to support Palestine and achieve peace. Ashton said that unconditional support should be provided to Gaza, adding that the EU granted Gaza €524m for reconstruction.

Kerry called for long-term rebuilding of Gaza’s economy and that developing its institutions under the PA is necessary to determine its future.

He added that several steps could be taken to aid Gaza, including expanding the control of Palestinian custom officials on Gaza’s border and expanding the PA’s control.

“As long as there is a possibility that Hamas could fire rockets on Israeli civilians at any time, the people of Gaza will remain at risk of future conflict,” Kerry said.

Even the most durable ceasefires are not a substitute for security for Israel, freedom and dignity for Palestine, peace and prosperity for both, he added.

“We appreciate Israel’s cooperation in continuing to provide humanitarian access to Gaza through its crossing, which is essential if all of this [effort] is going to work. We welcome that Israel has recently announced new measures that should allow increased trade in agricultural goods between Gaza and the West bank, and more permits for Palestinians business leaders to enter Israel,” he stated.

Blair said that there is a credibility issue between the two sides of the conflict, and that the Quartet will supervise the reconstruction procedure in Gaza.

Norway’s Foreign Minister Borge Brende said that Gaza aid should happen quickly, and planned to evaluate what will be achieved in six months.

Israeli Prime Minister Benjamin Netanyahu accepted the Egyptian request for Israel not to attend the conference, reported Israeli newspaper Haaretz Sunday. “Egyptian officials had feared that many Arab states, especially Saudi Arabia and the United Arab Emirates, would cancel if they knew an Israeli would attend,” reported Haaretz.

Secretary General of the Arab League Nabil El-Araby called for a timeframe to end the Israeli occupation of the Palestinian people, praising Sweden for declaring Palestine a state.

Over 2,140 Palestinians were killed during Operation Protective Edge, a 50-day Israeli military operation aimed at destroying Hamas’ ability to attack Israeli land with rockets and underground tunnels. Of the dead, 942 were women and children. The Israeli death toll was 69, including three civilians and one child.