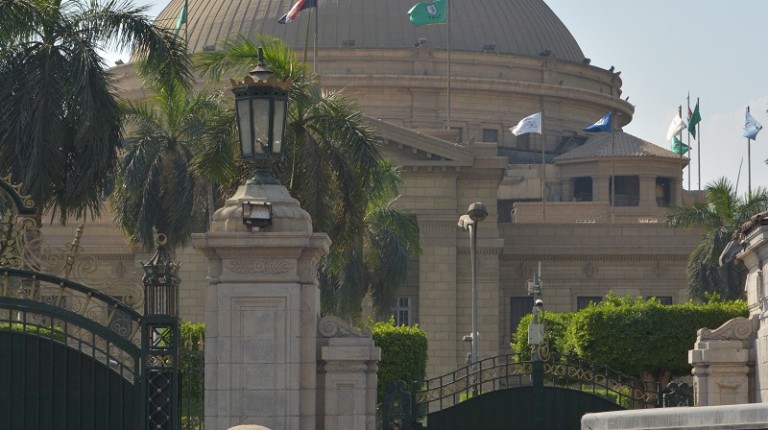 Minister of Interior Mohamed Ibrahim announced Monday that riot police will be stationed inside Al-Azhar University’s campus. Meanwhile, police will secure the Cairo University gates from outside in cooperation with the private security company.

This step by the Ministry of Interior took place as students clashed with personnel from the private security company Falcon on Sunday. Although it was reported that the company’s employees withdrew from securing the gates, the company later released a statement denying retreating from their positions.
Cairo University Chairman Gaber Nassar told state media that he asked police forces to spread its troops inside the campus as “thugs” broke into campus on Sunday and destroyed property belonging to the security company.

He added that there is an official protocol which asserts the authority of the police to enter the university in case of emergency.

The ministry released a statement Sunday saying that “students belonging to the outlawed Muslim Brotherhood organisation” protested in different universities.

It added that violence erupted at Al-Azhar University where students gathered, protested inside the campuses and destroyed electronic gates owned by Falcon.

The ministry added that the Cairo University president asked security forces to enter campus and to quell any protests.

At Menufiya University, five students of Students Against the Coup (SAC) movement were suspended for participating in protests and possessing banners and stickers, said the Association for Freedom of Thought and Expression (AFTE).

On Sunday at Cairo University, Falcon employees retreated from their posts at the main gate, as scores of students gathered outside to enter.

SAC spokesperson Youssef Saleheen said students clashed with personnel from Falcon, causing them to abandon the doors and retreat to the Cairo University metro station.

“Today Egyptian students proved that oppression and security measures will not stop their revolutionary movements,” Students Against the Coup (SAC) said in a Monday statement.

The group added “despite the heavy security presence by private companies, and organised raids by the police which arrested 83 students, students were able today [Sunday] to resist all attempts by the oppressive forces”.

The group along with other human rights organisations and movements like AFTE, 6 April movement, Al-Tayar Al-Sha’aby (Popular Current), condemned the student arrests, describing it as a violation to academic freedom.