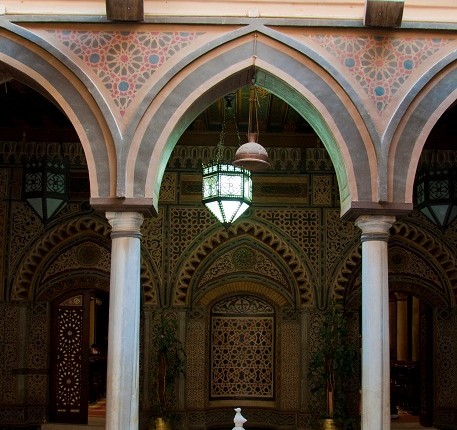 The Hanging Church, one of the oldest churches in the world, located in Mar Girgis in Coptic Cairo was re-opened on Saturday following 16 years of renovations. Both Egyptians and Russians were involved in the process of restoring the church.

The opening of the church was attended by Prime Minister Ibrahim Mehleb, Patriarch of Saint Mark Episcopate Pope Tawadros II, Archbishops Yacoub Soliman and Anthony Mikhael, and the Governor of Cairo Galal Saeed, in addition to a number of ministers, ambassadors and public figures.

Renovations were completed across two stages. The first stage focused on frescoes and was undertaken by Russian experts, while the second related to architectural aspects of the church and was led by the Egyptian Antiquities Authority, said Peter Mounir Awad, church custodian. He added that these elements, along with the death of Pope Shenouda and events of the 25 January Revolution, greatly lengthened the renovation process, which began in 1998.

The church is 1,700 years old, making it one of the oldest churches in the world, and is named for its location above the gatehouse of the Roman Babylon fortress, built on giant cylinders with a circumference of 120 cm. It is roofed with palm fronds, taking the form of Noah’s Ark, which distinguishes the church from the Coptic architectural model. It is closer in form to the Basilica model, as the church was built around the time of the Roman persecution of Copts in Egypt.

Awad added that the church has 110 icons, including an icon of the Virgin Mary drawn on deer skin which can be seen from all directions. It is known worldwide as the Mona Lisa of icons.

The church was built on the ruins of the site where, according to scripture, the Holy family-the Virgin Mary and Joseph the Carpenter-took shelter during the three years they spent in Egypt escaping Herod, who had ordered all children of the ages of two and under in Bethlehem to be killed. Others believe that the site was a retreat where a female monk once lived in one of the rock-hewn tunnels, according to Coptic researcher Hany Fawzy.

The renovation of the church is part of continued efforts by the Ministry of Antiquities to maintain Egyptian antiquities from all eras and open several archaeological areas to local and international tourism, said minister Mamdouh Eldamati. Renovating the church cost over EGP 101m.

The renovations involved architectural and structural work, as antiquities affected by a rise in the level of groundwater were repaired as part of an integrated project, said Engineer Wa’d-Allah Mohamed, acting chairman of the Projects Sector.

The project also entailed renovations for frescoes and icons, developing the security system by providing the church with surveillance cameras and securing the gates, and installing central air conditioning in order to stabilise temperature and humidity inside the church. Mohamed noted that gates and the public site were maintained and coordination took place to restore them to their original antiquarian form.

Construction of the church dates back to the late fourth century and early fifth century AD, as evidenced by the timber taken from the original structure and exhibited in the Coptic museum, said Nashwa Gaber, technical office chairwoman.

Many Christian ceremonies were held in the church, and some people charged with violating church rituals were tried on its premises. The church is also famous for the icons on its walls, numbering nearly 90, with the oldest dating back to the 15th century and the remainder originating in the late 18th century.