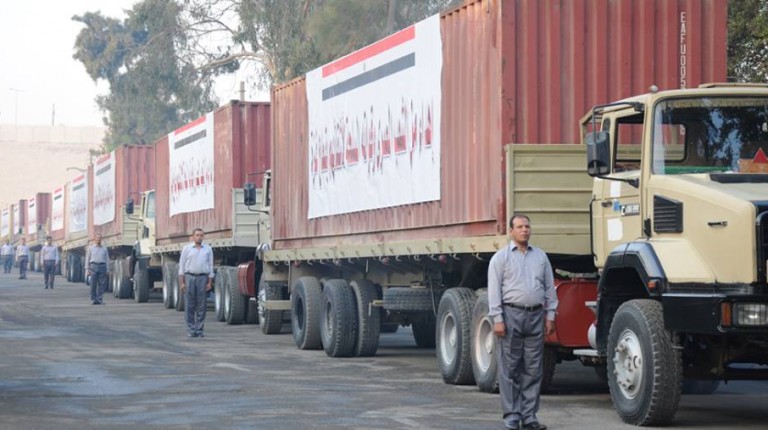 Egypt and Israel allowed the transfer of hundreds of tons of supplies to the Gaza Strip on Tuesday, at the height of concerted international efforts to rebuild the strip.

The Egyptian armed forces said in a statement that it has sent 200 tons of food supplies to the “Palestinian brothers in the Gaza Strip”. The efforts coincide with “Egyptian efforts and diplomatic endeavours to reconstruct the strip”.

The armed forces said the aid, which consists of 20,000 food packets is part of the support offered to Palestinians by the Egyptian people and army.

The Israel Defense Forces (IDF) announced the transfer of construction materials “in order to facilitate rehabilitation projects”. The “supplies are expected to include 600 tons of cement, 50 trucks of construction aggregates and 10 trucks of metal,” the announcement stated.

The IDF said the transfer will follow a mechanism which “will guarantee that the building supplies will be used for renovation of homes and public establishments for the benefit of the citizens of the Gaza Strip, while at the same time safeguard the security of the state of Israel”.

On Sunday, Egypt and Norway co-hosted the Gaza Reconstruction Conference in Cairo bringing together representatives from over 90 countries and international organisations.

The Palestinian Authority participated in the conference with the goal of collecting $4bn. A total of $5.4bn was collected, with Qatar making the largest donation, worth $1bn. The European Union pledged approximately $570m and Saudi Arabia made a donation worth $500m.

As a result of the 50-day conflict between Israel and armed Palestinian factions in the strip, 2,149 Palestinians and 69 Israelis died.

Palestinian President Mahmoud Abbas said during the conference that this was the third war Gaza has suffered from in six years, with a total death toll of over 3,600. Egypt and Norway have both stressed the need to prevent another war and ensure the non-recurrence of attacks.

The fighting in Gaza ended on 26 August through an Egypt-brokered ceasefire, but the Israeli military operations in Gaza have left behind a heavy destruction toll.

The fighting also completely destroyed 26 schools and 4 primary health centres, and destroyed or damaged 350 businesses and 17,000 hectares of agricultural land in Gaza.

The densely populated Gaza Strip, which is home to 1.8 million people, has been under siege since 2007, when Hamas took control of it following disputes with Fatah over Hamas’s victory in the 2006 parliamentary elections.