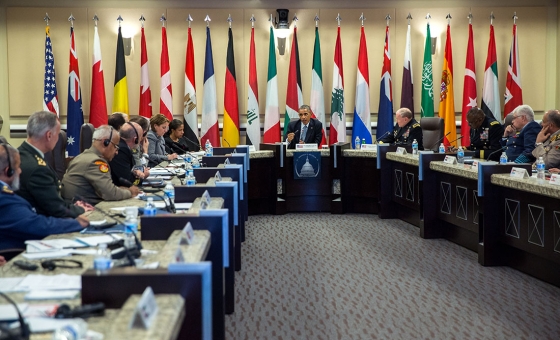 Defence chiefs from around the world gathered at Joint Base Andrews, Maryland, Tuesday to meet with US President Barack Obama to discuss the Islamic State of Iraq and the Sham (ISIS) threat.

The meeting will discuss a strategy to “degrade and destroy” the extremist militant group.

More than 20 nations, including Egypt, were represented in the meeting, as part of the US’ “broad international coalition” to confront the group, which has modelled itself as ‘Islamic State’.

Addressing the representatives at the meeting, Obama said: “this is going to be a long-term campaign” adding that “there are not quick fixes involved”.

Obama said the campaign “to degrade and ultimately destroy [ISIS]” is “not simply a military campaign”. He continued: “We’re also fighting is an ideological strain of extremism that has taken root in too many parts of the region.”

US Secretary of State John Kerry said last Sunday that Egypt’s role as “an intellectual and cultural capital of the Muslim world” is highly important in “in publicly renouncing the ideology of hatred and violence that [ISIS] spreads”.

He stressed the importance of Egypt’s religious institutions such as Al-Azhar and Dar Al-Ifta in supporting this effort.

Whether or not Egypt will play a military role in the “broad international coalition” is unclear. Foreign Minister Sameh Shoukry said in September that Egypt has to “fight its own battle against a common enemy”, referring to militancy in the Sinai Peninsula.

President Abdel Fattah Al-Sisi refused to comment during an interview on US television, also in September, if the US “needs the Egyptian air force” to carry out strikes on ISIS.

He said: “Give us the Apaches and F16s that you have been suspending for over a year and half now.”

Kerry, who met with Al-Sisi in Cairo on Monday, said that 10 Apache helicopters would be delivered to Egypt in November. The US suspended the delivery of military equipment to Egypt in October 2013 pending Egypt’s democratic progress.

The White House reported that nine countries have conducted “flying sorties” so far in the campaign against ISIS. Most recently coalition airstrikes have been carried out in Kobani on the Syrian side of the border with Turkey and in Iraq’s Anbar province. Obama confirmed airstrikes would continue in both locations.

At the end of the meeting, Obama said he was “encouraged by the unanimity of viewpoints and the commitment of the countries involved to make sure that we’re making steady progress”.