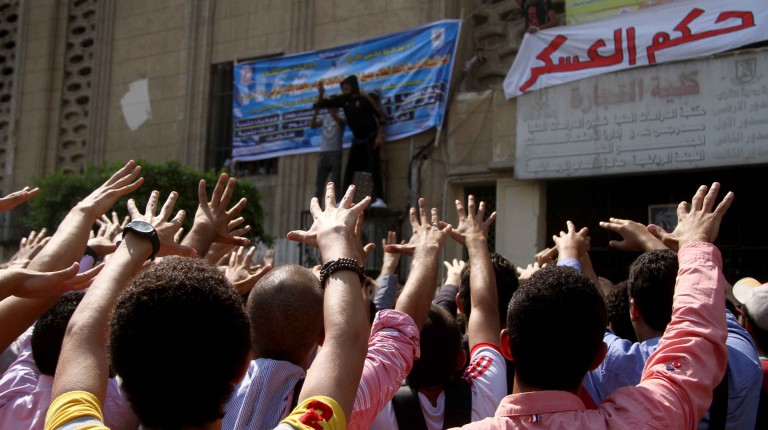 Evidence collected by Amnesty International (AI) on the dispersal of a student protest by private security at Alexandria University indicated “excessive force” was used “to crack down on student demonstrations”.

Findings from the investigation by AI released Friday said that “security forces stationed outside the university’s main gate fired tear gas and shotgun pellets at a crowd of students”. It added that the private security firm, Falcon, which is used at Alexandria University, “used firearms and pellets, randomly against students when it was not necessary”.

The protests which occurred on 14 October resulted in 35 students injured and 150 arrested. Three of the students had been injured critically. Two security personnel were also injured. Of the 150 students arrested, “twenty-two remain in detention on vague or groundless charges including participating in protests without authorisation”, AI said.

The protest had been organised against stricter security policies on campus which AI said included: searches at university gates; stricter policing of male female mixing; and new security personnel powers “to stop and search students on the university campus at any time”.

The students were also protesting against unfair trials and the detention of fellow students arrested in previous demonstrations.

How the clash occurred at Alexandria University remains unclear, “but as they intensified, security forces broke down the main gate storming the university premises, chasing students and continuing to fire at them”.

Hassiba Hadj Sahraoui, AI’s Deputy Director for the Middle East and North Africa said: “The Egyptian security forces have a bleak record of using arbitrary and abusive force against protesters including students.”

A student interviewed by the rights group said they were followed on campus by an armoured personnel vehicle and “were suffocated by the tear gas and ran away moving further inside the university campus”.

Another student said he had seen his friend shot in the mouth and the eye and as they fled into a campus building for protection. The student added: “Security forces followed us and continued to shoot tear gas and pellets inside the building.”

AI appealed for the Egyptian government to cease such heavy handed security practices.

“Any use of force in the policing of demonstrations, even when they have turned violent or are regarded by the authorities as illegal, must comply with international law”, the organisation said.

“The lack of accountability for such violations, including unlawful killings, gives them the green light to carry on brutalising protesters,”  Sahraoui added. “The government must act urgently to rein in the security forces”.

Since the start of the academic school year on 11 October, protests have broken out across university campuses throughout Egypt. The protests have resulted in clashes between students and security forces, resulting in more than 200 university students being arrested.

“The arrests and subsequent activities appear to be solely directed at the students’ peaceful exercise of the right to free assembly,” HRW said Thursday.

“The arrests were apparently aimed at preventing a revival of campus protests that have erupted repeatedly since the ouster of former president Mohamed Morsi, in July 2013,” HRW added.