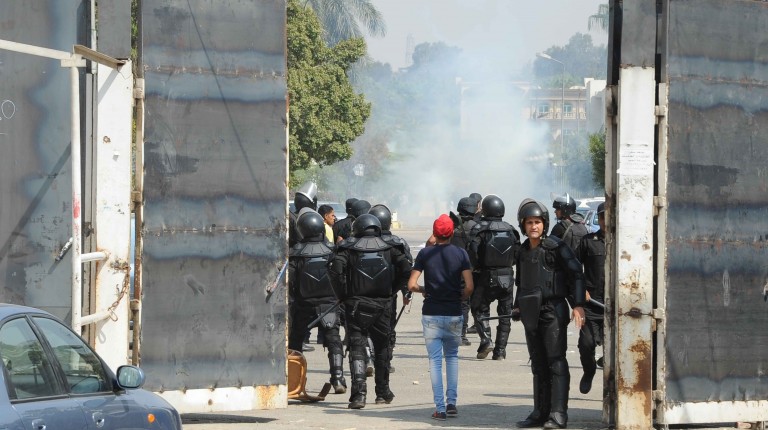 The Ministry of Interior said 29 students were arrested from Al-Azhar, Minya, Mansoura and the Faculty of Dentistry in Cairo University amidst protests at universities around the country.

Meanwhile, riot police stormed into university campuses across Egypt, as students held protests in the second week of the new academic year.

Protests are taking place condemning the arrest and suspension of fellow students, according to Students Against the Coup (SAC) spokesperson Youssef Saleheen.

The group added that a similar incident took place at Alexandria University, where police officers took video footage of protesters which they used to arrest students outside campus.

Students blocked the Kasr Al-Nil Road in front of Cairo University clashing with security forces. Saleheen added that Special Forces from the army with armoured vehicles were standing guard outside campus, in anticipation of protests.

At Mansoura University, students burnt a security gate and a motorbike owned by private company Falcon.

SAC group issued a statement on Sunday morning claiming that a new wave of protests took place at the universities of Suez, Beni-Suef , Al-Fayoum, and Helwan.

No official count of arrests and injuries has been released so for.

The students, the group added, will continue protesting the presence of security forces, including private security firm Falcon, on and around campuses.

The group said that the oppression of students will result in an “uprising”, where they expect more confrontation with police and Falcon security firm.

Last week the group held a number of protests clashing with riot police and Falcon personnel.