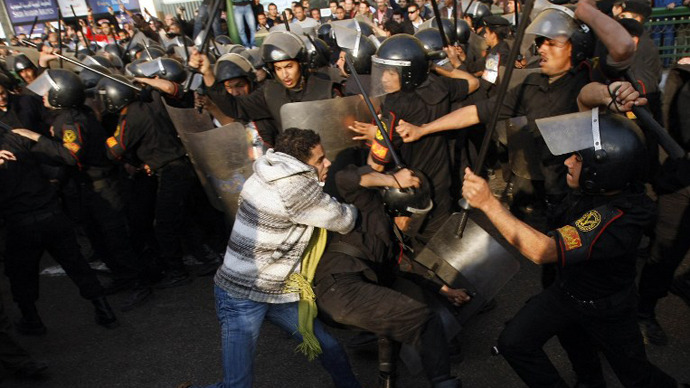 The Egyptian Center for Economic and Social Rights (ECESR) filed a case on behalf of Mohammed Shaaban Douma who was injured during the 25 January Revolution and denied necessary treatment.

ECESR filed the case against President Abdel Fattah Al-Sisi, Prime Minister Ibrahim Mehleb, Minister of Health Adel Al-Adawi, and Head of the National Council for the Care of Martyrs and Injured Families Sayed Abo Beh. The case was filed to the Administrative Court after Douma asked for funding and the easing of his travel for treatment several times, all of which were in vain.

In a Wednesday report, the ECESR said that Douma was injured on 28 January 2011 when police forces shot him in the head, chest and stomach.  Both Douma’s eyes were injured and after several procedures atrophy in the left eyeball remained causing further damage, which the International Medical Center recommended repairing through a procedure unavailable in Egypt.

The report said that giving no attention to Douma’s case is “unconstitutional and violates laws and international human rights conventions”.

ECESR added that this case is not the only one, and that there are hundreds of heroes suffering the reluctance and failure of officials, which cost may be death or living with permanent disabilities.

“[ECESR] stresses that it stands by those injured during the revolution and their right to get full treatment whether in Egypt or abroad,” the statement said. “They are not less than the people who are being treated abroad at the expense of the government with millions spent just because they are famous or influential people.”