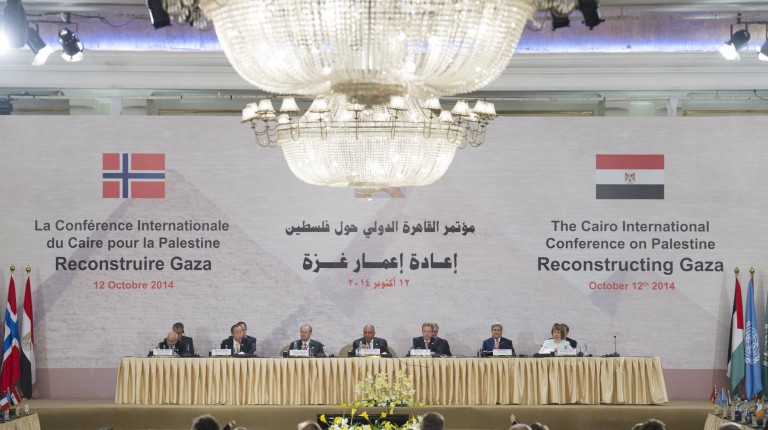 Ever since the conference hosted in Cairo on 12 October for the reconstruction of Gaza managed to garner $5.4bn of pledged aid, a looming question has imposed itself: will the strip receive the promised donations given the uncertainty surrounding the role Hamas will play in Palestinian politics?

It was decided during the conference that half the sum would be dedicated to work in Gaza; but it was not announced where the rest will go.

The provision of reconstruction aid will be supervised jointly by the United Nations and the West Bank-based Palestinian Authority.

The US promised $212m of, apparently conditional, aid to Gaza, with US Secretary of State John Kerry saying the two-state solution is now more compelling than before.

“Out of this conference must come not just money but a renewed commitment from everybody to work for peace that meets the aspirations of all, for Israelis, for Palestinians for all people of this region,” Kerry said during the international gathering.

“As long as there is a possibility that Hamas could fire rockets on Israeli civilians at any time, the people of Gaza will remain at risk of future conflict,” he said.

“It all depends on several aspects, on top of which is how the [Hamas-Fatah] relations will be like in the coming phase,” senior analyst at Al-Ahram Center for Political and Strategic Studies Mohamed Gomaa told Daily News Egypt.

In 2007, after months of infighting between Fatah and Hamas which followed two years of political disputes, Hamas launched a surprise coup in the Gaza Strip, assuming control over the territory. Dozens of Palestinians were killed and hundreds others wounded during the clashes between the two sides.

When the battle was over, the Palestinian people found themselves divided, with Gaza controlled by Hamas and the West Bank still run by Fatah.

Egypt seems to support the US stance.

In his speech at the conference, President Abdel Fattah Al-Sisi said that reconstruction and meeting the needs of Gaza’s residents are based on “a permanent truce and the practice by the national authority of all its powers in the strip”.

“There is no alternative to this settlement so that the Palestinian people could channel efforts for reconstruction while being unafraid that what they have built through your support could be destroyed,” Al-Sisi said.

Senior Hamas leader Bassem Naeim contested the Egyptian position, arguing that it is illogical donations should be conditional on solving the political divisions that have been pending for years.

“We wish to solve the current divisions [with Fatah]; but such matters take time to solve… this is the main concern we have now regarding the acquisition of aid, mainly that it will not reach Gaza at all or be delayed,” Naeim told Daily News Egypt.

The PA had previously asked for a $4bn in aid, less than the collected sum.

“We hope that this aid reaches Gaza for reconstruction [as] the international community that gave justifications for the Israeli attacks against [the strip] owes this to the Palestinian people,” Naeim said. “The Palestinian street is not positive that Gaza will get this aid based on previous experiences.”

Naeim said the aid promised in the previous conference on Gaza reconstruction held in Egypt back in 2009 never reached the strip.

“We are used to a gap in time between promises and the actual funding,” Gomaa said.

“The countries will not pay their donations before they see indicators of stability in Gaza…and that no escalations between Fatah and Hamas will occur,” he added.

According to Gomaa, Hamas has always sought to control internal security in Gaza, which is likely to derive clashes.

“In this case, Israel will find excuses and say the aid is controlled by terrorists,” he argued. “The fact that the Palestinian authority does not control Gaza may have an impact on the process of sending aid to the strip.”

Hamas is believed to be in a dire need for a National Unity Government that is actually effective, so that the process of reconstructing Gaza kicks off.

“If reconstruction does not begin, Hamas will be facing the outrage of the public opinion and that of the residents of Gaza, considering [the faction] an obstacle… that cares only about its interests rather than those of the people,” Gomaa said.

Israel was clear about its determination not to allow Hamas to rearm.

On Monday, Israeli Defence Minister Moshe Ya’alon said during a meeting with UN Secretary General Ban Ki-moon, that Israel will not allow the reconstruction of the Gaza Strip if Hamas uses construction materials to rebuild infiltration tunnels used for terrorist purposes.

One day later, Hamas accused Israel of stalling in lifting the blockade on Gaza.

Abou Zahri further said that the ceasefire agreement reached in Cairo has nothing to do with the armament of Hamas.

A member of Hamas’ Political Bureau had earlier said the truce between Israel and Hamas does not prevent the latter from rebuilding the tunnels.

In August, Egypt negotiated an open-ended ceasefire agreement between Israel and the Hamas that ended a seven-week war against the Gaza Strip.

However, nobody could guarantee that Hamas and Israel will continue abiding by the truce, not the first one reached between the two sides only to be followed by a new war.

“The situation needs to be quiet between Hamas and Israel,” Gomaa said. “Hamas will abide by the truce but I wouldn’t say this commitment would last.”

Naeim agrees with Gomaa’s view, saying: “We wish we don’t get back to the state of confrontation [with Israel] at least in the time being.”

The Hamas charter outlines the movement founding identity, stance, and goals. Hamas emphasises in its charter that it is part of their creed to continue fighting Israel.

The charter identifies Hamas as the Muslim Brotherhood arm in Palestine and declares its members to be Muslims who “fear God and raise the banner of Jihad (holy fight) in the face of the oppressors (Israelis).

The charter states that the Palestinians’ struggle against the Jews is very great and very “serious” and calls for the eventual creation of an Islamic state in Palestine in place of Israel and the Palestinian Territories, and the obliteration or dissolution of Israel. It further emphasises the importance of jihad (holy war).

“It’s not the matter of the Hamas Charter. Hamas only cares about controlling Gaza,” Gomaa argued.