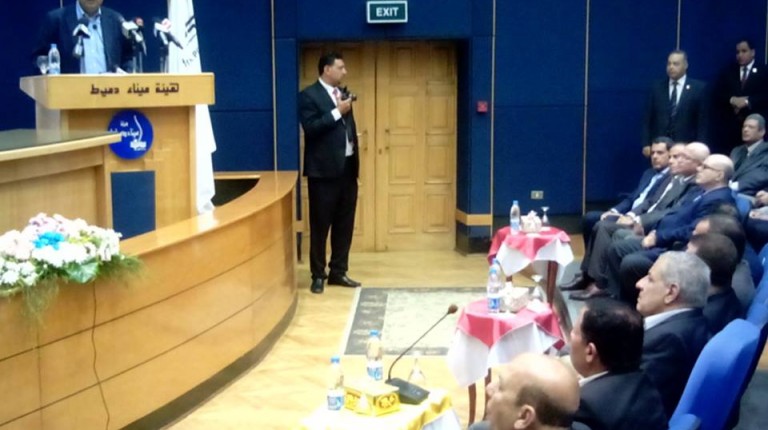 President Abdel Fattah Al-Sisi issued a decision on Tuesday to form the executive committee to overlook the global logistics centre project, to be headed by Prime Minister Ibrahim Mehleb.

Members of the committee will be: Minister of Supply and Internal Trade Khaled Hanafy; Minister of Planning, Ashraf El-Araby; and representatives from the ministries of Transportation and Housing and the armed forces, according to a statement from the Ministry of Supply.

Earlier in October, the government adopted a project to establish a global logistics centre in Damietta for the handling and storage of grain and food commodities. Mehleb announced it as a national project that is no less important than the Suez Canal project.

Mehleb, accompanied by the ministers of supply, planning, transportation, housing, investment and local development, made a field visit to the project on Tuesday. Hanafy held a presentation to discuss the details and the economic and social revenues of the project.

The project will increase the capacity of annual marine trading of grains and food commodities in Damietta port from the current 7-8m tonnes to 40m tonnes, 12m tonnes of which will be re-exported locally, said Hanafy, adding that the total amount of trade expected for the multimedia transportation systems for the project is around 65m tonnes/year.

Damietta has been identified as the first site for logistics operations to begin, Mehleb said last week. He added that the ministers of planning and supply will be responsible for working on integrated studies for the project.

Mehleb pointed out that the total area for the proposed project is 3.35m square metres, of which 0.56m fall within the boundaries of the Damietta Port. The remaining 2.79m square metres comprise a portion of the untapped industrial area northeast of the port and are owned by the New Urban Communities Authority (NUCA).

The project includes re-planning for the grain area within the port and its division into a separate, integrated station, Mehleb explained. The area will fall under the jurisdiction of the customs area at Damietta Port in order for logistic, manufacturing, and storage activities to be practiced within the Customs Office.

The third zone will be allocated to corn production and covers oil, starch, and fructose extraction, while the fourth zone will be dedicated to distilling and packaging sugar. The fifth zone will be designated to complementary industries based on the abovementioned industries, including macaroni, pastries, burgers, and various food industries as well as pastures.

On 22 October, Hanafy announced that US-based engineering and construction company Bechtel has expressed its willingness to fund the logistics project and any national project in Egypt, according to a ministerial statement.

Following a meeting with Bechtel representatives, Hanafy said that they discussed methods of funding the trade and shopping city, which will be established near the Suez Canal, with the value of EGP 40bn.