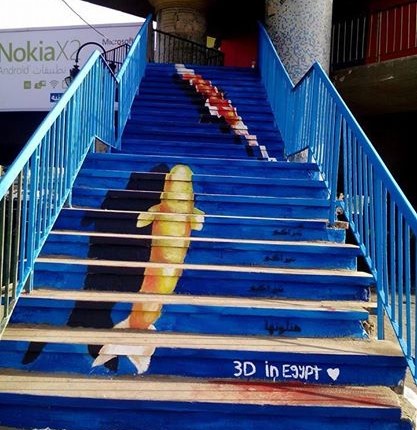 “If you want to see the change, be the change”. With this motto, a group of students at Helwan University’s Faculty of Fine Arts are waging a war against the dull grey colour that dominates Egypt’s streets.

Aiming to change this frustrating reality, the group came up with the idea of colouring different parts of the city, aiming to introduce comfort and happiness to the hearts and minds of the people in Cairo.

“Everything in my life is attached to colours,” said Marwa Nasser, a second year student at the Faculty’s Decoration Department, and the initiative founder.

The whole thing started when Nasser noticed how most of Egyptians go to their work with a miserable, fretful look on their faces.

“I was thinking how exchanging the dull grey colour that dominates most of the Egyptian streets with other bright colours,” she said, “[this] may help improve people’s mood which will eventually reflect on their satisfaction and productivity levels.”

As Nasser explained the idea to a group of her friends, they became very enthusiastic to take part in the project. Although they thought that permissions and licenses would be the most difficult part of the process, surprisingly it was not.

“We paid a visit to the governorate office holding some photos for the place and the different designs we wanted to implement. We were asked to submit an application,” she noted.

The group was surprised when their request was quickly approved by the officials and they praised the attention and support they found on their side.

The group held their first session on 31 August, choosing the stairs of 15 May Bridge, connecting Cairo and Giza governorates, to be their first destination. They then coloured the stairs of Ghamra’s footbridges, the walls in front of North Giza Court in Kit Kat neighbourhood, in addition to many other places.

Inspired by colouring the grey city campaign, another group of students at the Faculty’s Photography Department decided to follow the footsteps of their colleagues launching another campaign called “We will colour it!” Campaign members painted the stairs of 6 October Bridge, which wasn’t an easy task at all.

“We donate our time, effort, materials and brushes” said Menna Metwally, one of the campaign’s coordinators. “However, some paint companies volunteered to provide us with the needed colours to minimise the costs we have to pay.”

They searched the internet for creative designs until the idea of drawing 3D pictures on the bridge’s stairs came to their minds.

When they posted information about the event on their official Facebook page, they were surprised to find the idea appealed to large numbers of volunteers unrelated to the arts. Motivated by their love of the country and their hopes to beautify its gloomy streets, dozens of young people showed their support of the project by volunteering time, materials or even through writing some encouraging comments under the photos posted on the page.

“Although it may be so frustrating to find out that people are still throwing garbage on the coloured stairs, we are still very optimistic,” said Metwally. “We believe that it’s our responsibility to raise people’s awareness about the necessity of cleaning the public streets and beautifying them and the importance of throwing rubbish in the allocated places.”

Aiming to bring arts and colours to the ordinary citizen in all over Egypt, the group’s next project focuses on colouring the slum areas in Cairo and Giza.

“Because of the high rates of poverty, sickness and illiteracy people suffer from in such deprived areas, we found that arts with their different types have no place in the hearts and minds of the residents there,” Nasser said.

They started contacting charity organisations that work in slums to help them determine which places they have to start with.

“We need the eyes and minds of slum residents to get familiar with seeing beauty everywhere,” she said.  “We believe that this will gradually urge them to maintain the beauty and cleanliness of their streets, districts and squares.