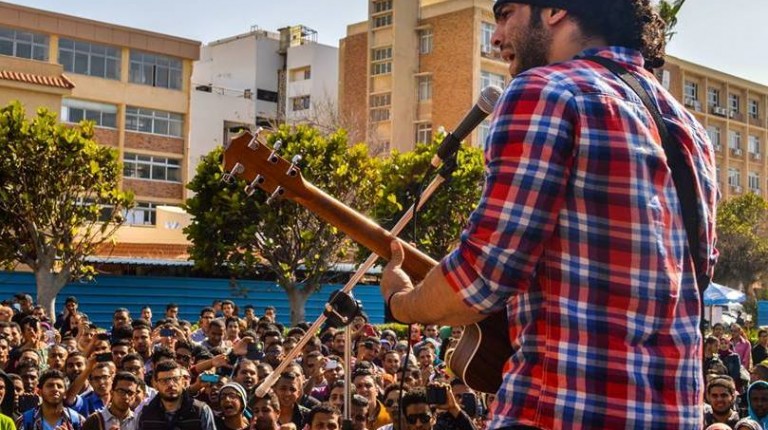 The singer Ramy Essam recently left Egypt to spend two years in Malmö, Sweden, according to a statement issued by The World Forum on Music and Censorship (Freemuse), an independent organisation advocating and defending freedom of expression for musicians worldwide.

Essam, 27, has decided to move in response to his interrogation in June 2014, by the National Security Police and the “continuous censorship of his music” in Egypt, according to the statement.

The singer has not been able to perform since the ouster of the former president Mohamed Morsi, except for a small concert launching a report on Censorship and Creativity, which was organised by Freemuse and the Association for Freedom of Thought and Expression in June.

“After the revolution I have continued to address social and political issues in my songs,” Essam wrote in a statement. “As an artist and citizen I feel an obligation to be engaged in my society and positively add to the democratic process.”

Consequently, Essam has been followed and harassed by the police, according to the statement.

“During the time of the Brotherhood, he could still work,” said Ole Reitov, director of Freemuse, “but since the military took over, it has been very difficult.

Essam has been denied permission to leave the country several times, so he could not fulfil several offers to perform or participate in events abroad, Reitov said. In June 2014, the singer was called for interrogation by the Egyptian State Security.

“Security systems interrogate people to say things without really saying things,” he said, “Beware, we know what you do, so shut up.”

Essam is not the only artist who has suffered from censorship in Egypt. Publications have been confiscated, and two cultural events and two TV channels have been banned during the first 100 days of President Abdel-Fattah Al-Sisi’s rule, according to a report by the Arab Network for Human Rights information (ANHRI).

“Democracy is about dialogue. It is not about shutting down ideas or artistic expressions, which is oppositional to the majority or the ruling system,” wrote Essam. “Due to all restrictions and censorship this dialogue is not possible in Egypt now.”

The singer was able to finally leave Egypt in September. However, harassment still followed him.

In a concert he gave at Helsinki, Finland, a group of Egyptian people protested against him, Reitov said.

“We learnt that the Egyptian embassy paid these people,” he claimed, “other countries are known for doing this, and when you’re not in the country you tend to not know what’s really going on.”

Essam’s stay in Malmö, which is a member of the International Cities of Refuge Network, will give him a chance to develop and grow, Reitov said. The “safe city” system was not designed to “make people leave their places”, but it grants residencies for artists who are being followed.

“Ramy is not seeking asylum,” Reitov said, “he got this opportunity to go away for two years and he is willing to come back.”

The singer will not stop commenting on social and political issues not only in Europe, where he will stay, but also in Egypt.

“I will – from a distance – try to keep contact with my beloved audience and supporters in Egypt,” Essam wrote. “I will return.”