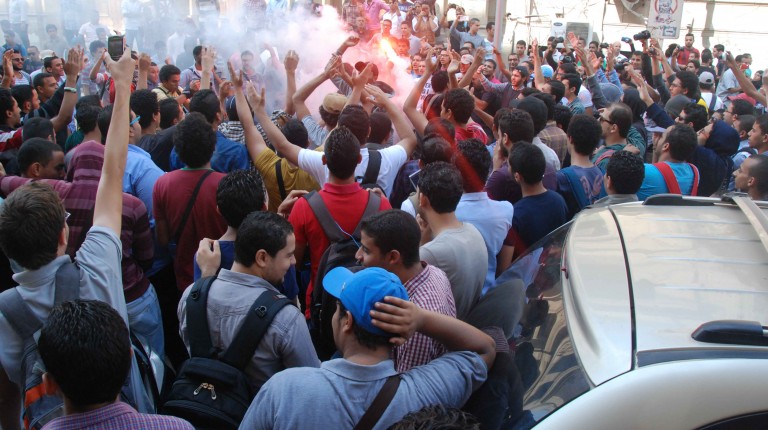 Security efforts to tackle “Brotherhood elements and terrorism” in universities across Egypt resulted in the arrest of “around 34 people” on Tuesday for “inciting violence”, according to a statement that day by Ministry of the Interior.

“Al-Azhar University condemns the riots and blockage of roads erupting [Tuesday] in Nasr City neighbourhood, calling on students not to commit such acts, which are [religiously prohibited by Islam],” said the university in an online statement. “Whoever gets involved in these incidents will be immediately expelled from the university,” the statement added.

According to Human Rights Watch and Student Freedom Observatory, 110 university students were arrested from the beginning of the academic year until 14 October, across several public universities in Egypt. State TV also reported that 10 students from Cairo University were expelled. The students were supposed to show up for an official investigation on counts of rioting inside campus.

The Association of Freedom of Thought and Expression (AFTE) stated that at least 230 students have been arrested since the beginning of the new academic year.

Three explosive devices were found and deactivated in the campus of Fayoum University, according to a Ministry of the Interior statement issued on Wednesday.

The Ministry of the Interior also announced that police forces deactivated six explosive devices in Mansoura University on Tuesday, while approximately 250 students were staging a protest that resulted in the arrest of 11 students.

Beni Suef University witnessed protests as well, where the protestors reportedly smashed the windows of a police vehicle. Three others were arrested during an attempt to block the ring road during a rally but police forces dispersed them.

Students Against the Coup leader Yousef Alsalheen, said “whenever clashes break out at any campus, the security forces wage an inspection raid on the entire campus and its surroundings, sometimes randomly arresting people that did not take part in any protests.”

“We aim through our protests to voice the stories of our detained colleagues and those who were killed last year,” he added.

In Suez, a member of the student union was arrested to be detained for 15 days on counts of inciting violence and taking part in riots inside the campus, in addition to joining a banned organisation, on Wednesday.

A total of 22 students from Alexandria University have been arrested since the beginning of the academic year. The students are detained on counts of interrupting the educational process, assaulting the security forces, protesting without permission, and vandalism of public property.