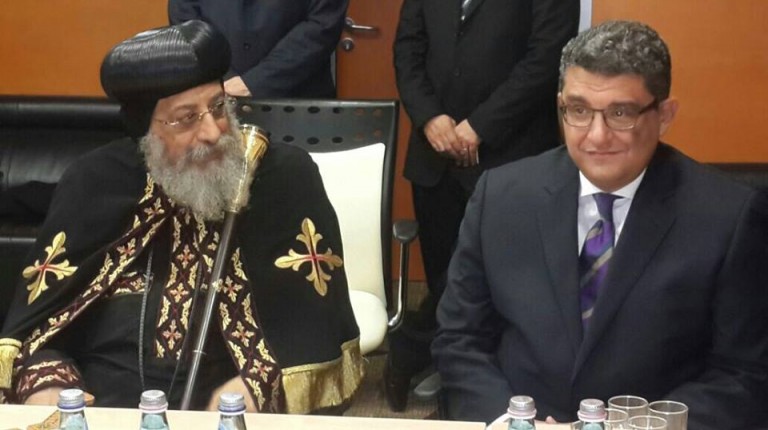 Pope Tawadros II visited Moscow this week to meet with senior Russian officials and members of the Russian Orthodox Church.

According to a statement by the Ministry of Foreign Affairs, Tawadros’ visit is historic “by all measures”.

The visit marks efforts to “support the spiritual relations between the hurches and between the two peoples and two states”, the statement said.

Egyptian Ambassador to Russia Mohamed Al-Badry stressed “great respect for the church and the people of Russia”. He added that the Pope arrived in Russia with “a message of love and appreciation from the Egyptian people to their Russian counterparts”.

Egypt has sought closer ties with the Russian government in recent months, with President Abdel Fattah Al-Sisi holding a number of meetings with his Russian counterpart Vladimir Putin.

Putin last met with Al-Sisi in August, when the Russian leader invited Al-Sisi to Sochi for two days, to work on bilateral relations between the two countries.

The duo discussed “the latest developments in the [Middle East] region and bilateral relations”, according to Egypt’s State Information Service, focussing on the situation in the Gaza Strip, Iraq, Libya and Syria.

Just a week before their meeting, Al-Sisi and Putin spoke briefly on the phone and “confirmed their mutual interest in further advancing the comprehensive mutually beneficial cooperation”.

The relationship between Egypt and Russia began to strengthen towards the end of 2013, the same time as Egypt’s relations with the US worsened, culminating in the suspension of US military aid to Egypt pending confirmation of the nation’s democratic progress.

This prompted rumours of an arms deal between Egypt and Russia that never came to fruition. The foreign ministry insisted that it was not replacing one power with another, but rather broadening Egypt’s foreign relations.