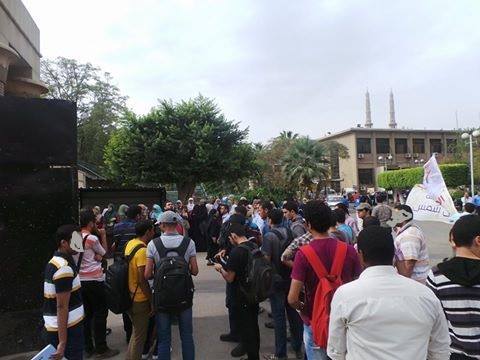 The group released a statement Sunday vowing a new week of protests against the mass suspension of students from universities across the country, due to their political activities.

Sultan said that Ain Shams University students staged a demonstration Sunday morning in solidarity with the “forced migration of Sinai residents that is taking place by the army and the current government”.

“Units of Special Forces have been surrounding the campus since the beginning of the day. We totally refuse and condemn such presence of police,” he added. “The government is now pointing its guns and ammunition towards the students.”

Similar protests took place at the universities of Cairo, Al-Azhar, and Beni Suef, where students chanted against the arrests of colleagues.

The SAC branch in Beni Suef University distributed flyers condemning the disappearance of two female students in the vicinity of the campus last Thursday.

At Helwan University, students staged a silent protest expressing their condemnation of what they called “military rule”.

The Association for Freedom of Thought and Expression (AFTE) issued a weekly report Saturday, documenting violations in university campuses.

“Violations continue as police continue to storm universities, students are being suspended for participating in protests as well as arrested in dawn-raids”, the organisation said. “Police used force in dispersing student protests in more than four universities. Also, campus security was reported to have assaulted students.”

Last week, the Ministry of Interior announced that 43 students were arrested, while possessing a great amount of fireworks and a number of small explosive devices.

However, a student from Cairo University who preferred to be anonyms, said that students usually do not possess any explosive materials, and that they use only fireworks to distract police forces.