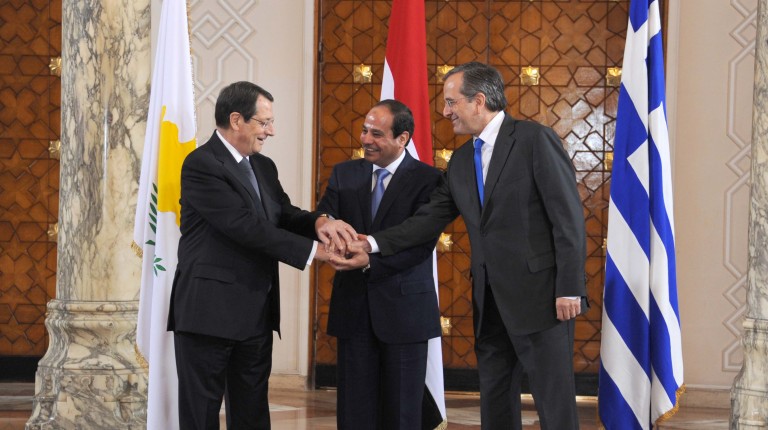 Al-Sisi described the summit as marking a “new phase of trilateral cooperation, which began over a year ago”.

Both visiting leaders, whose countries are European Union (EU) members, said they would act as an “ambassador” for Egypt within the EU. Samaras expressed to Al-Sisi that he looks forward to further cooperation “in international forums, particularly in the framework of the EU, to explain Egyptian positions”.

Anastasiades and Al-Sisi discussed ways to deepen cooperation, especially in the field of natural gas. The pair explored “the possibility of using the infrastructure and the Egyptian industry eligible to receive gas”.

The gas reserves in the eastern Mediterranean have seen Cyprus begin to pursue agreements on nautical boundaries with both Egypt and Israel. In the lead up to the summit the three nations called on Turkey to stop attempts to chart gas deposits in areas claimed by Cyprus.

Turkey does not recognise Cyprus as part of the island’s Greek-Turkish ethnic divide. Turkey has occupied the northern half of the island since 1974.

Cyprus has repeatedly complained to EU institutions about the ongoing Turkish presence on the island.

The maritime border around the Mediterranean island has also been a major point of contention between Cyprus and Turkey.

Anastasiades stressed that the cooperation between Egypt, Greece, and Cyprus is “not directed against” any nation in particular, and condemned “Turkish provocations” in the region, a topic the three leaders discussed during the summit.

Egypt’s relations with Turkey are also fragile, with both countries downgrading their diplomatic presence in each other’s capitals earlier this year. Turkish President Recep Tayyip Erdogan has been consistently critical of the Egyptian government since the ouster of Mohamed Morsi in July 2013.

The meeting of the three head of states in Cairo also involved discussions of regional issues including the situation in Libya, which also has a lengthy Mediterranean coastline. Anastasiades and Samaras praised Egypt’s efforts to combat terrorism, and the Cypriot president stressed the “need for stability in Egypt to be able to address regional challenges, especially terrorism”.

Al-Sisi and Samaras focussed on economic cooperation, with Al-Sisi looking to Greece’s experience in tackling economic hardship. Al-Sisi invited Samaras to invest in Egypt and to participate in the economic conference scheduled for February 2015.