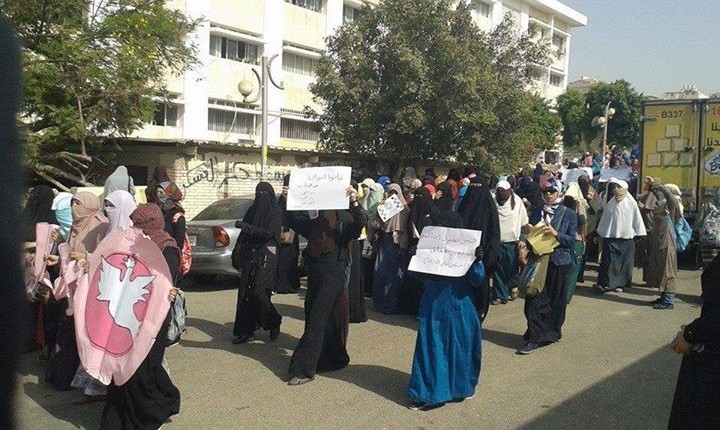 One student was arrested Monday afternoon after being suspected of setting fire to a garden in the Faculty of Science in Al-Azhar University, said the Ministry of Interior.

One female student and another five school students were also arrested after being captured throwing a bag with fireworks and money over the campus fence, the ministry said in a Monday statement.

Hafsa Al Farouk, spokesperson of Students Against Coup (SAC) movement, said that police forces stormed into Al-Alzhar Girls University to disperse a protest with armoured vehicles. Farouk said that two female students who were not taking part in the protests were assaulted by police forces, and sustained critical injuries.

“The first suffered a vaginal bleeding and was rushed into a hospital. The second was hit in the eye,” Al Farouk said. She added that over the past two weeks “police forces have been staging random arrests of anyone they are suspicious of. On Monday six female students were arrested outside the gates of the university.”

Also protests took place at Mansoura University, the Al-Azhar branch in Daqahleya, and in the private University of Sadat. In Minya, police forces fired tear gas and stormed the campus.

SAC, a student organisation opposing the current regime, promised Sunday a new wave of protests will start against security forces until students regain their “dignity and respect”.

Since the start of the academic year on 11 October, student protests have been taking place against the presence of police forces at campuses and the arrest and suspension of fellow students.