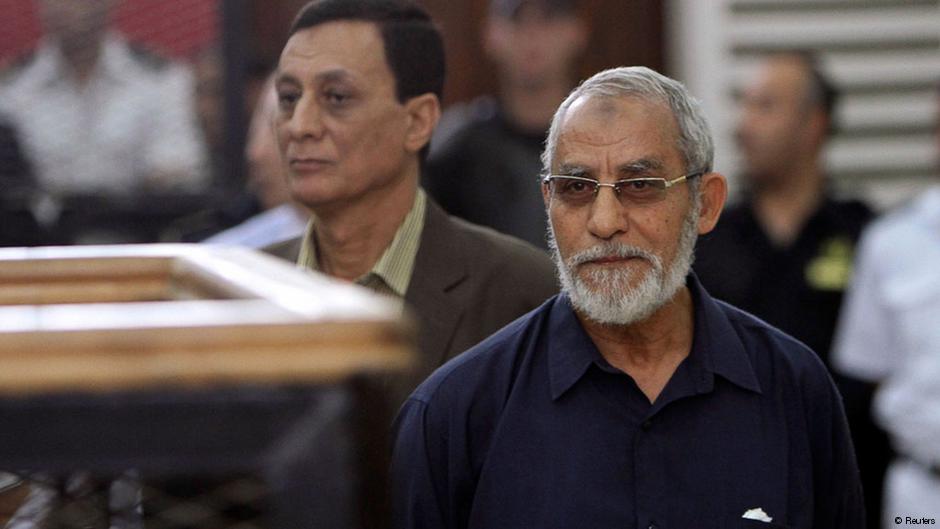 Muslim Brotherhood Supreme Guide Mohamed Badie was not brought to court on Saturday for security reasons during his retrial and that of 182 others, all of whom were sentenced to death for murder and committing violence.

The Prisons Authority cited “the security circumstances in the country” in a memo, state television reported on its website. The case was set to be viewed by the Minya Criminal Court.

Lawyer Gamal Abdul Hameed said that, since Badie was originally sentenced in absentia, he must be brought to court for a renewal of procedures.

Abdul Hameed said that what happens next depends on when security forces bring Badie to court. The supreme guide must first be brought before prosecutors for a renewal of the trial procedures, after which a date will be set for his retrial session.

On 21 June, the Minya Criminal Court upheld death sentences for 183 people, including Badie. They were charged with the murder of two police officers and the raiding, burning and looting a police facility on 14 August, 2013, one of the most intense days of violence in the aftermath of the overthrow of former president Mohamed Morsi.

Badie and the rest who are being retried are part of a group of 683 who were handed preliminary death sentences in the same case in April. However, in June, the court had the death sentences of four commuted to life in prison and the remaining 496 were acquitted.

In Egypt a death sentence must be considered by the Grand Mufti; his decision is returned to the court but is not legally binding. The court can choose to amend or uphold the original verdict.

Following this, an appeal can be lodged with the Court of Cassation whether through the request of the defence team or by order of the prosecutor general. If accepted, a retrial takes place in the same court but under a different judge.

The final decision on whether or not to uphold a death sentence is taken by the court that issued the preliminary sentence.