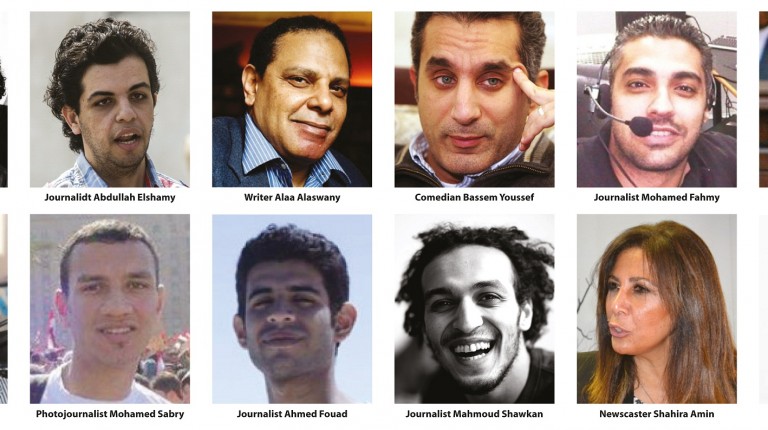 “He stands straight and tall, impeccably attired and starched from head to toe. His freshly washed countenance and youthful zeal shield a Herculean strength and nerves of steel… a hero like no other… He is the chosen leader of the people because he is willing to be their servant.”

This is not a part of a historical romance novel. This was the beginning of a three-paragraph-long description of President Abdel Fattah Al-Sisi published in the state-owned newspaper Al-Ahram.

Al-Sisi’s cult of personality first bloomed as a result of the pivotal role he played in the ousting of president Mohamed Morsi on 3 July 2013. Twenty days later, when the general addressed the nation and asked people to take to the streets to demonstrate their support for military action against “terrorism”, most Egyptian media – both state-owned and private – rallied behind him.

“Sisi’s message has been received and the people answered: ‘we authorise you!'” was the title of the leading story on the front page of the state-owned Al-Akhbar newspaper the next day.

Mustafa Hegazy, advisor of former president Adly Mansour, appeared on television on 1 August 2013 and spoke in English about what he termed “religious fascism”. A slogan stating “Egypt Fights Terrorism” was shown on the top left of the TV screen.

Following Morsi’s removal, the government shut down Islamist television networks. The Muslim Brotherhood-owned television channel Misr 25 went off air along with several other Islamist-run channels after the military statement announcing the ouster of Morsi. The Administrative Court ruled in favour of shutting down Islamist channel Al-Hafez.

Egyptian media took it upon themselves to largely praise Al-Sisi or glorify state action against “enemies of the nation” and “terrorists”.

On any given day on state-TV talk shows one could hear both hosts and guests cheering on the president and stressing the need to fight terrorism.

This situation continued toward the presidential elections in May 2014. Despite the elections law which stated that media should give the same amount of attention to all candidates, the media disproportionally gave greater coverage to Al-Sisi.

As the months go by, Egyptian media are becoming ever more supportive of the president and his policies. The editors-in-chief of several major state-owned and private newspapers announced in late October their support for all security measures taken by the Egyptian state to confront terrorism and to promote homeland security.

They declared their rejection of any attempt to undermine the role and the performance of the army and the police, and called for coordination between newspapers and satellite channels to “confront terrorist plans” and to “prevent elements who support terrorism from infiltrating the press”.

Several hundred Egyptian journalists rejected the measure in a joint statement, asserting that the agreement between the editors represented “the repudiation of freedom of opinion and expression”. But such bold assertions of independence are becoming increasingly rare given the current media climate in Egypt.

In December 2013, the Committee to Protect Journalists said Egypt had become the world’s ninth most prolific jailer of journalists.

Al Jazeera Cairo Bureau Chief Mohamed Fadel Fahmy and correspondent Peter Greste were sentenced to 7 years in prison, and producer Baher Mohamed to 10 years in prison in June 2014. Al-Sisi said on Tuesday that judicial rulings must be respected, and refused foreign intervention when the US called on their release.

195 journalists were assaulted and injured between 30 June 2013 and 30 May 2014, according to an AFTE report. Six were killed and 68 others were detained during the same period.

Al Jazeera journalist Abdullah Elshamy spent 306 days in prison without charge until he was released in June 2014.

At least three journalists have been tried and sentenced by military tribunals in 2013. Sinai-based photojournalist Mohamed Sabry was handed a six-month suspended prison sentence in November 2014. Another Sinai-based journalist, Ahmed Abu Deraa, was given a suspended sentence of six months in prison by a military court in Ismailia.

In a move that could lead to the freedom of some of the foreign journalists currently in Egyptian prisons, Al-Sisi issued a law on Wednesday that grants him the authority to “transfer” foreign defendants and detainees to their home countries to be tried.

The situation is more complicated for Egyptian writers. Renowned writer and journalist Alaa Al Aswany announced in June that he stopped writing his weekly column because “as soon as you express a different opinion, television presenters insult you using the dirtiest language and accuse you of betraying your country. This is emotional terrorism and is carried out under approval of the authorities.”

Al Aswany had come under media pressure after criticising Al-Sisi. “Is it moral to accuse an Egyptian citizen of treason on television just because he disagreed with the president?” he asked. He went on to argue that in Egypt it is now only permissible to “glorify” Al-Sisi. “The environment of oppression and suppression of freedoms is growing every day,” he added.

The television show Al-Bernameg of doctor-turned-comedian Bassem Youssef was suspended after he joked about frenzied Al-Sisi supporters in November 2013. The show resumed later, but in May 2014, Youssef decided to stop Al-Bernameg citing he was under pressure.

Newscaster Shahira Amin was dismissed from her position for implying that the removal of Morsi was a coup. Amin later told the Wall Street Journal that “now is the worst ever”.  She added:  “It’s more Mubarak policies, but more dangerous for journalists.”

Pro-government television commentators typically use the catchphrase: “At least we are not Syria or Iraq” to dismiss any criticism of government.

According to a Pew Report in May 2014, Al-Sisi was viewed favourably by 54% of Egyptians, while 45% viewed him unfavourably, a more mixed picture compared to what many in the Egyptian media have reported.

The Egyptian Center for Public Opinion Research (Baseera) stated on Sunday that the percentage of those who approve of the president’s performance has increased to 88%.

However, given the diminishing space for expressing dissenting opinions in today’s Egypt, the results of the poll may have been skewed by self-censorship and practical considerations related to the risk of singing outside the choir.