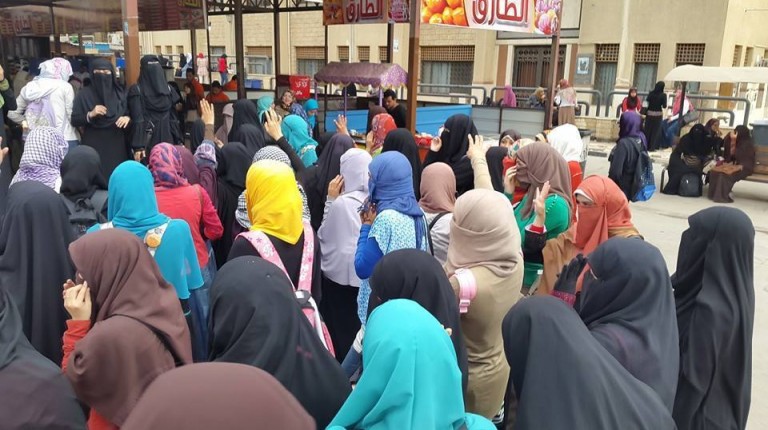 The Egyptian Revolutionary Council, a political organisation active in Switzerland and Turkey, announced its support for a new campaign called Tadamon Solidarity Group with Egyptian Students.

The council’s support comes on the eve of the annual International Students’ Day, which is 17 November.

The Tadamon group was launched after the beginning of the new academic year on 11 October to protest alleged violations and assaults on students. It called upon national and international student unions “to support the legitimate demands of Egyptian students”, according to a statement by the group.

The group also demanded that “the international community maintain pressure and show solidarity to stop violation on students and to stop police presence on campus, as well as the release of all detainees”.

Citing different violations against students during this academic term and in the last year, the group said: “While other students in the world are receiving education, Egyptian universities are being transformed into military units with the security forces storming campuses on different occasions.”

The group also claimed that “university administrations expelled more than 638 students, while 2,186 were arrested, with three receiving death sentences” over the past year.

Meanwhile, Students Against Coup (SAC), a group formed to oppose the current regime after the ouster of Mohamed Morsi, staged a number of protests Sunday. These came in anticipation of other demonstrations planned for 17 November to mark International Students’ Day.

SAC spokesperson Hafsa Al-Farouk told Daily News Egypt that protests will continue until “the siege by security forces around the university campuses is broken”.

The group will stage more protests during the International Students’ Day to attract the attention of the international committee to the “violations happening to students in Egypt”, Al-Farouk said.

The group is a strong opponent of the current government and the military, which it refers to as the “coup government”. It called upon students to refuse military service until the army “returns to its barracks and abandons politics”.