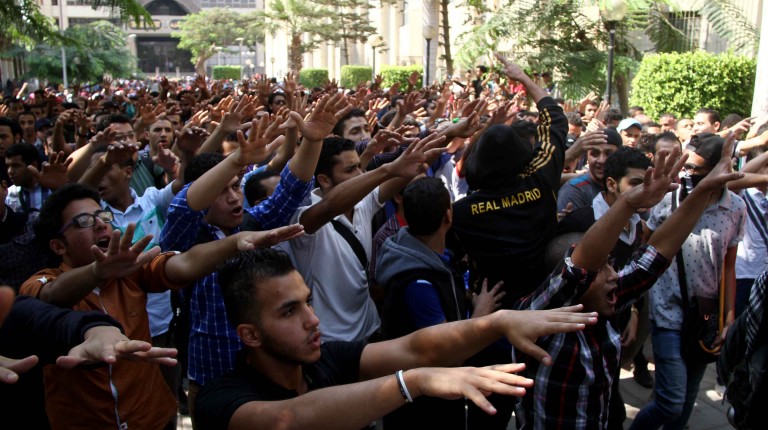 Police conscripts and police vans surround the main gate of Cairo University. All entrances to the main campus are equipped with x-ray machines and metal detectors manned by private security guards.

The university administration believes these security measures are necessary to prevent rioting and violence. Deadly clashes occurred in several universities across the country last year, including at Cairo University, where three students were killed in clashes with security forces during anti-government and anti-military protests.

Taghreed R, a third-year student at the Faculty of Law, believes the measures are too strict, yet she acknowledged that the campus now feels more secure. “The unrest is now very rare, compared to last year, when it was our everyday reality,” she said.

In addition to the inspections at the campus entrances, security personnel also inspect students before they enter lecture halls, added Taghreed. Given that some of her larger classes have thousands of students, she said that the inspection process can be very time consuming, and that it often makes her late for class.

“I leave my home at 6.30 in the morning to make sure I arrive at least half an hour before the lecture starts to allow time for the security checks,” she said.

Security personnel on campuses do not have any weapons, except metal and explosives detectors. In attempt to avoid objects being thrown from outside, the university administration covered the gates doors and campus borders with tin plates.

Falcon security group confirmed that it receives approximately EGP 5m per month to provide security for 12 universities across Egypt. This is the equivalent to 10% of the EGP 50m spent on securing universities over the past year. The firm announced that the crowding at some of the university’s gates is temporary, as it is caused by students who still do not have their new student ID.

The university’s administration undertook other measures as well, such as painting trees, sidewalks, and walls inside the campus to remove all graffiti with “offensive phrases against the police and the military”. This comes in addition to security personnel patrolling the premises on a 24-hour basis to prevent any infractions from taking place inside the university at night.

However, the security measures vary from one gate to another. Falcon Group does not cover the Faculty of Engineering campus located in front of the main campus, and one of the most turbulent spots during last year’s clashes.

Founded in 1908, Cairo University is one of the oldest and most prestigious universities in Egypt. With a student body of over 250,000 it is also the largest. It was here that US President Barack Obama delivered his address to the Muslim world at the start of his first presidential term in 2009.

Talking to Cairo University students, Daily News Egypt found that large numbers believed new security measures were necessary to safeguard the educational process. Many, however, criticised the ways in which such measures are being enforced.

Samah A, a third-year student in the Faculty of Science who wears a niqab, said security personnel are intolerant of her attire. She added they always suspect her of belonging to an Islamist group, and that she regularly has to explain that her outfit has nothing to do with politics.

“Male security personnel insist every time to see my face against my will. Such arguments often take a very long time and make me miss my early morning lectures. I usually have to wait a very long time for them to find a female guard,” she said.

A first-year student in the Faculty of Veterinary Medicine, Mohamed A, said that the security checks miss many things.

“If you want to enter an explosive item or anything that is presumably illegal, you will not do it explicitly through the main campus gates,” he said. “I saw my colleagues successfully entering drugs several times through university back doors.”

“Nobody would hate to feel safe, but I hate to see the security personnel discriminating between the students according to their looks,” said Heba M, a senior year student at the Faculty of Political Science and a member of the faculty’s Student Union. “When I stand in the security check line I often see girls who are not being inspected,” she added.

According to Mohamed, the new security measures are still too loose to combat violations inside campus. “Our educational process depends mainly on the safety conditions inside the campus, it is even more essential than any educational reforms.”

At least 21 Cairo University students have been arrested since the beginning of the new academic year, according to Egyptian rights group, the Association for Freedom of Thought and Expression (AFTE). A total of 46 Cairo University students were arrested during the 2013-2014 academic year, according to WikiThawra, an independent Egyptian monitoring organisation.

Every Sunday and Wednesday during the past academic year, the Students against Coup (SAC) group organised rallies on university campuses in which students would chant against the government. The protests frequently turned into violent clashes between the students and security forces.

Heba, the political science student, said that the unrest not only interrupted the educational process but also the student union’s activities. “The clashes were so violent that we had to postpone or cancel our meetings. This year, the situation is much more stable so far.”