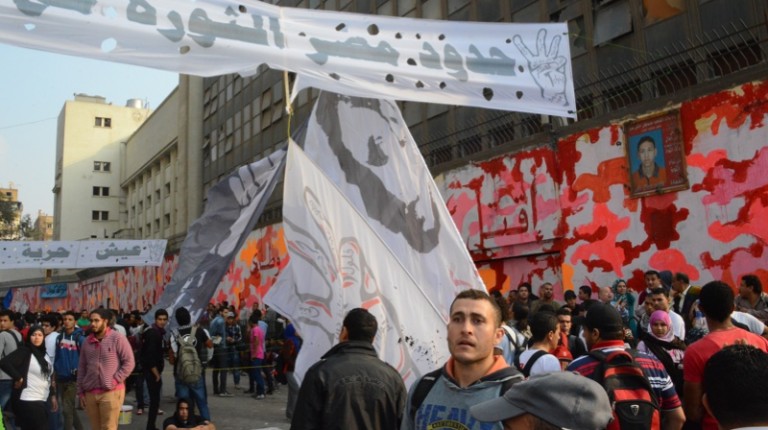 The 6 April Youth Movement Democratic Front said the revolution can now only “return to the streets, universities and factories,” in a statement on Tuesday.

6 April released the statement two days ahead of the third anniversary of the Mohamed Mahmoud clashes.

The movement called on “revolutionaries to unite against the enemies of the revolution” and plans to commemorate the anniversary of the clashes on Wednesday by taking to Mohamed Mahmoud Street. 6 April believes that doing so is a right guaranteed by the constitution.

The street and surrounding areas of Downtown Cairo was the site of deadly clashes between protesters and security forces which started on 19 November 2011 and lasted for five days.

In the commemoration, 6 April will demand retribution from the “killers of martyrs”, starting from the time of ousted president Mubarak to the rule of President Abdel Fattah Al-Sisi. It also insists on “reforming the Ministry of Interior” and releasing all those wrongfully detained under the Protest Law.

The decision to take to the streets on Wednesday was taken without any coordination with other groups “especially not the Muslim Brotherhood” and groups that fall under its umbrella, the movement said.

The group believes that with the coming of the third anniversary, the “regime symbols which were responsible for” dispersing the protests are “now in power”. It added that the only thing left for us is to “unite and hold on to our revolution”.

Police fired teargas at unarmed protesters during the clashes in 2011 claiming they were preventing them from attacking the Ministry of Interior. The ministry’s headquarters lie not far away from the site of clashes, on a parallel street to Mohamed Mahmoud.

It remains unclear, however, exactly how many people died in the violence. The Ministry of Health reported the death toll at 41, with Amnesty International acquiring a document claiming 51 people were killed. Hundreds were injured as a result, including dozens left with critical eye injuries.

A group of approximately 50 people staged a flash protest in Downtown Cairo on Monday evening, chanting anti-government slogans and lighting fireworks as they made their way from Mohamed Mahmoud Street to Bab Al-Luq, eventually dispersing.