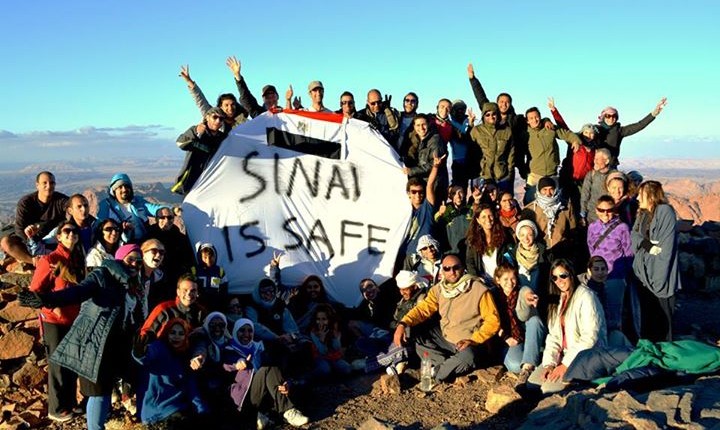 Over 60 hikers joined a walk, entitled Sinai-is-Safe, in the southern Sinai mountains, at the end of October.

The hikers included Russians, British, Chileans, New Zealanders, Austrians, Dutch, and both Egyptians and Bedouins – as well as families with kids as young as six.

They climbed Jebel Abbas Basha, one of the highest mountains in the peninsula, and stayed the night at an old Bedouin orchard.

“The tourism crash since 2011 in South Sinai has been disastrous. Sinai has been almost universally portrayed as a place of danger,” said Benjamin Hoffler, one of the hike organisers. “Western governments have warned against travel, especially to the mountain parts of the south.”

The campaign is all about challenging what is being said about Sinai and its portrayal in the media through their “numbers and openness about the hike”. The campaign also aims to help the Bedouin community in South Sinai bond with the outside world.

The Sinai-is-Safe walk, which will be organised every six months, is the outcome of several months of community discussion. They discussed how the hikers could challenge perceptions of South Sinai as a place of danger and present it in a positive way instead.

Media coverage of North Sinai has “mixed up” the foreign public perception on Sinai as a whole, Hoffler said.

“It has not distinguished properly between North Sinai – where there is persistent unrest – and South Sinai, which has been largely peaceful,” he added.

Governments have warned their people against South Sinai and its mountains in particular, without backing up their warnings with historical evidence, he said.

“These mountains are some of the most beautiful, historic and fabled in the Middle East – if not the world,” Hoffler said, encouraging people to pay the southern peninsula a visit.

“Each Bedouin tribe has a strong connection to its territory, and each brings its own extra level of security to the area. Each tribe watches its lands carefully – even if that process is not visible to visitors – and they discuss who is there and what they are doing,” Hoffler explained. “Tribes in the mountains know their lands very well and if there are any doubts about who is there they report it to the Sheikhs or local officials. They are the most reliable sources to ask about safety.”

South Sinai occupies a special place in the Sinai-based traveller’s heart. For them, it is “the most spectacular” part of the Middle East. The southern peninsula enjoys a package of wonders, from mountains to Bedouin and ancient Egyptian legacy.

South Sinai has a great potential in becoming the best adventure tourism destination in the Middle East, he said. This would be great benefit to its Bedouin communities.