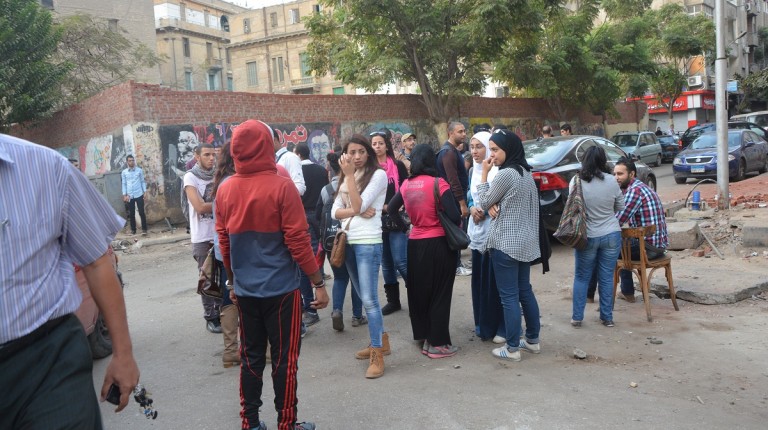 An eyewitness told Daily News Egypt that a protest of approximately 50 to 100 people in Mohamed Mahmoud Street in central Cairo was dispersed by police using tear-gas.

Police also arrested demonstrators in the surrounding streets, where several other small protests came together.

The 6 April Youth Movement Democratic Front said Wednesday that it cancelled plans to protest in Mohamed Mahmoud Street, on the third anniversary of clashes that took place there.

The group had announced earlier this week that it will commemorate the anniversary of the deadly Mohamed Mahmoud clashes by taking to the street Wednesday. It announced however that it will instead join “companions in the revolution” in their vigil outside the Press Syndicate.

Several political parties and movements including Al-Dostour Party, the Revolutionary Socialist and the Misr Al-Qawia Party are scheduled to hold a press conference inside the syndicate. It will be followed by a vigil on the stairs outside the syndicate later on Wednesday, the day coinciding with the three year anniversary of the clashes.

The vigil will include families of people who lost their lives in the clashes.

At the syndicate, the groups and parties will demand “retribution from the criminals” for those who died three years ago and those who died during previous anniversaries commemorating the clashes.

The 6 April Youth Movement Democratic Front’s previously decided to take to the streets  without any coordination with other groups “especially not the Muslim Brotherhood” and similar groups, the movement said.

In April, the Cairo Court for Urgent Matters ruled to ban the 6 April Youth Movement for “espionage” and “activities that distort Egypt’s image”.

The Anti-Coup Alliance, a coalition of parties and groups that includes the Muslim Brotherhood, co-signed a statement which said the anniversary opens the door for “the children of the revolution to reunite”.

The statement said the anniversary should be the start of the lining up of Egyptians after having been a reason for disagreement and division.

The Brotherhood was initially part of the broad coalition that forced Mubarak to resign, and counted among revolutionary forces. At the time of the clashes, the Brotherhood was preparing for the upcoming parliamentary elections and would eventually gain 45% of seats in the lower house of parliament and 58% of the upper house.

In commemoration of the clashes, Students Against the Coup (SAC) has planned to organise marches embarking from universities on Wednesday, according to a statement by the group on Tuesday.

The group will “start a new revolutionary wave led by students”, according to SAC spokesperson Youssef Moslem.

For security reasons, the group has not yet disclosed the destination or route of its marches or whether they will end up on Mohamed Mahmoud Street.

During the clashes on Mohamed Mahmoud Street three years ago, police fired teargas, birdshot, rubber bullets, and live ammunition at unarmed protesters claiming they were preventing them from attacking the Ministry of Interior. The ministry’s headquarters are close to the site of clashes, on a street that is parallel to Mohamed Mahmoud.

Hundreds of people were injured in the 2011 clashes, including dozens who suffered critical eye injuries. It remains unclear, however, exactly how many people died in the violence. The Ministry of Health reported the death toll at 41, while Amnesty International said it acquired a document claiming 51 people were killed.