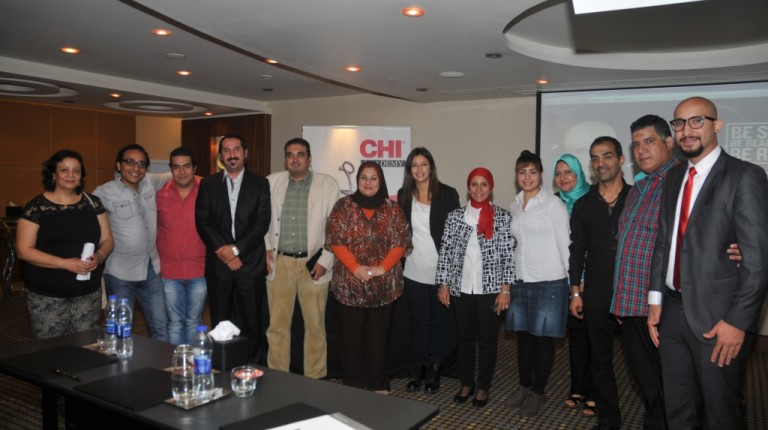 All her life, Samia Selim loved to dress people’s hair, even within her family. After obtaining her degree in science, she followed her passion and started a hairdressing salon instead of starting a lab.

Selim is one of over 4,000 hairstyling professionals who participated in CHI Academy’s programme. The academy, which was first launched in 2007 by Systems Egypt, attempts to empower professionals in the hairstyling field through free training.

Training sessions in the academy cover a wide range of topics in the field of hair care such as healthy treatment, styling and colouring, as well as other skills, such as sales skills and communication skills a stylist needs to work with his client.

“I was trying to learn more because it’s a responsibility,” Selim said, “I can’t work with a client without training.”

As a part of Systems Egypt’s strategy that considers both the clients and the hair care professionals’ health, the company does not only exclude harmful chemicals from its products. It also works on promoting healthy approaches to hairstyling, said Gehan Sadek, the director of Human Resources and Training at Systems Egypt.

During their work, hairdressers are subjected to harmful chemicals including ammonia and formaldehyde. Exposure to these chemicals could lead to health problems ranging from skin rash, eye irritation and difficulty in breathing to cancer or loss of sight, according to the US Occupational Safety & Health Administration.

One participant in the academy, Reda Mohammed Ali, suffers from sinusitis and allergies, and has faced a lot of trouble working with chemicals. Unlike Selim, Ali has worked as a professional hairdresser since she was a teenager, but health problems almost made her quit the only job she had.

“Sometimes I could not breathe,” she said, “I used to bleed from my nose.”

Yassa Abdel Messiah, who is passionate about hair colouring and has worked in the field since he was 13, was told that he cannot do his job anymore because his health was in danger.  Abdel Messiah, who is allergic to ammonia, had stopped working for a month after his hands became swollen and blistered.

“My career was in jeopardy,” he said.

After serving in the Peace Corps for 18 years, Inas Qodsy, one of the academy trainers, decided to open her own hair salon. Despite her passion for hair styling, Qodsy hated dyes, she said.

“I hated them for their harms,” she said, “I did henna instead.”

Out of respect to her technicians and clients, Qodsy was first introduced to CHI during her search for “safe products.”

“I am a client before being a salon owner,” she said, “CHI also helps raise the social status of hair dressers.”