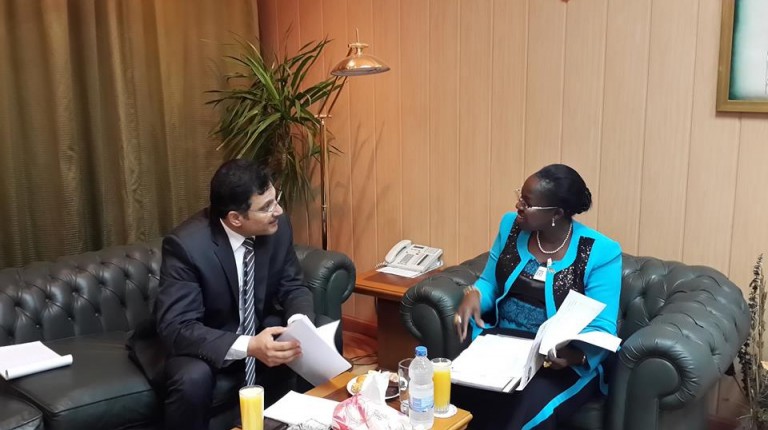 Prior to the meeting of the heads of states, the water ministers of the two countries held talks. Egypt’s Water and Irrigation Minister Hossam El-Din Moghazy and South Sudan’s Water and Electricity Minister Jemma Nunu Kumba held talks on Friday in which they discussed preparations for the signing of the water agreement.

Moghazy was cited by state-run newspaper Al-Ahram as saying that the agreement will allow for the presence of an official mission of the Ministry of Irrigation, similar to the one in Sudan. Al-Ahram reported that this agreement is among several others due to be signed, which contribute to strengthening ties on all levels between the two countries.

Benjamin also informed Shoukry about the talks that were taking place between South Sudan’s government and opposition mediated by the Intergovernmental Authority on Development (IGAD), a development body in the east Africa region.

Kiir’s visit comes shortly after conflicting parties in South Sudan agreed to end nearly a year of fighting. The IGAD announced on 9 November that the conflicting sides agreed to a detailed timetable to be applied as part of their implementation of the cessation of hostilities agreement.

The conflict began in December 2013 when Kiir accused his former vice president, Riek Machar of attempting to stage a coup d’etat.  Egypt sent a delegation to South Sudan to announce its support to all regional efforts aimed at reaching a quick solution to the crisis and to help find an “exit.”

However Egypt’s and other countries’ diplomatic efforts failed to avoid the escalation of the crisis and the ensuing fighting between South Sudanese government and opposition troops has uprooted around 1.5 million people and left more than 7 million at risk of hunger and disease, according to figures from the United Nations.