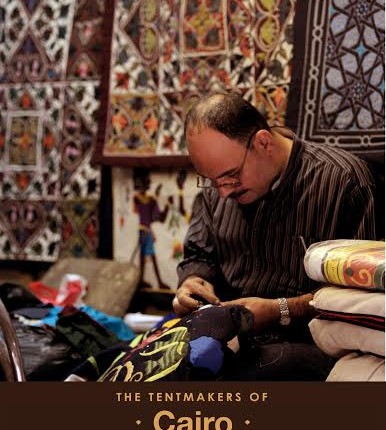 The 36th Cairo International Film Festival (CIFF) closing ceremony was held on the 18 November. Within the festival theme, the “Industry Forum” was held between 11 and 17 November at the Open Air Theatre in Cairo Opera House. ‘The Tentmakers of Cairo’ is the title of a feature documentary by Kim Beamish, that was screened as “Work in Progress” at the festival.

It all started when Bridget, Beamish’s wife, took a job in Cairo. In April 2012, Kim and Bridget along with their son and daughter touched down at Cairo airport with a sense of excitement, confusion and some anxiety about the future, but overall they were looking forward to the next three years.

His documentary does not merely cite the history of Cairo’s famous tentmakers, their art and work. Beamish has delved deeply into the tentmakers’ lives, and how they have experienced the past three years and how recent history has affected their work.

For Beamish, the tentmakers themselves represent what is really Egypt. Away from the noisy streets, political infighting, religious struggles and the things that can become “unbearable” about this country, he tries to show how these men show the true Egypt.

Beamish attempted to show that every Egyptian in their own way has had to deal with every moment of Egypt’s ongoing revolution and turmoil. At the same time, they have had to deal with their own personal and financial issues, in the case of the tentmakers this is leading to the demise of their culture and traditions.

This whole mix of an “emotional rollercoaster”, survival story, and appreciation of art is what makes this feature documentary an interesting watch. Daily News Egypt sat down with Beamish and talked to him about the film and his own experience in Egypt.

How did you feel about moving to Egypt right after 25 January 2011?

As a filmmaker I could see nothing but potential in being in a country trying to rebuild itself, a nation bright eyed about future potential. As a country that could once again see itself being the centre of something especially after similar protests and uprisings sprung up all around it.

How did you choose “The Tentmakers” as the topic of your film?

Before I left Australia, I worked at the Australian National University and had met Professor Bob Bowker, who had previously been Australia’s ambassador to Egypt. So as soon as we knew we were coming to Egypt I contacted Bob to see if he might have a few ideas for stories I might be able to follow.

And when I asked he was quick to reply: “You should take a look at the tentmakers of Cairo.” I think my straight up reply was something like, “The what?” I had been hoping for a political contact, an activist, and access to an organisation, maybe. But the ‘Tentmakers of Cairo?’

He told me about his wife Jenny Bowker, a world renowned quilter, and how she had befriended the tentmakers in her time here.

Even weeks later as Bridget, Jenny, Bob and I sat around a small table drinking coffee two days before we were about to leave I was not at all sure that these tentmakers were what I was looking for.

A week later I met Jenny Bowker outside a bookshop in Zamalek and she took me to meet the tentmakers. Since that day almost three years ago I have not spent a day where I have not in some way been in contact with or doing work on ‘The Tentmakers of Cairo’.

And how did the tentmakers react to you approaching them for the first time?

From the start these men, particularly Hosam, Ekramy, Tarek and Hany, invited me unequivocally into their lives. So much so that Ahmed and his family really have become a part of my own. As all filmmakers and journalists will attest access is everything, without access you have nothing. These men have allowed me, and my camera, into every part of their lives, into their homes, access to their families as well as invitations to traditional and family gatherings. I could not have made the film without this trust and acceptance. I know it sounds silly but I could not have done it without them.

How can we watch your documentary?

Right now the film is a month or so away from completion as we finish the more technical aspects of it. I am hoping that then I will be able to organise a screening here in Cairo, and I have submitted the film to several film festivals worldwide were I hope it is well received and people get to see another side of the events coming out of Egypt.

Is there anything else you would like to add about this experience?

Three years ago there were several revolutions for me and not one of them has ended. Each of them will change the way I see the world and through them I have created true, lifelong friends and family as well as having witnessed history as it was being made.

I may be leaving Egypt very soon but Egypt will never leave me and I will always in some way look back at this time and this film as the basis of whatever may happen to me in the future.

News about the film can be found at its Facebook Page “The Tentmakers of Cairo” or the website www.tentmakersofcairo.com