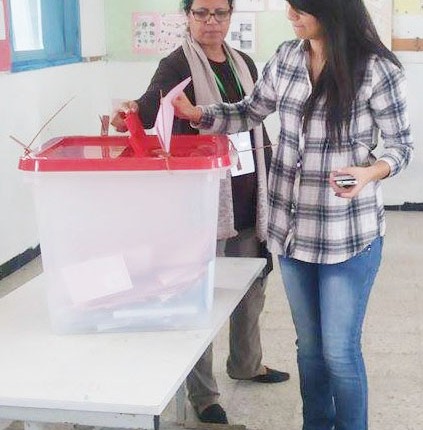 Tunisians went to the polls on Sunday in the country’s first presidential elections since the 2011 uprising that toppled the regime of Zine El Abidine Ben Ali.

“I vote Marzouki, because he’s a charitable person,” said Kolthum, a 45 year-old computer technician. “His salary is about 30.000 dinar but he keeps only 3.000 for himself and gives the rest to poor people.”

“I don’t want to say who I am voting for, it’s personal,” said a woman who declined to reveal her identity. Her husband, though, did not hide his views: “Essebsi is too old to rule,” he said. “We need someone younger.”

Beji Caid Essebsi, who is 87, is the leader of the secular pro-business Nidaa Tounes party. After his party won a plurality of the vote in last month’s parliamentary election, Essebsi came to be seen as the front runner in the presidential poll.

The country’s main Islamist party, the Ennahda Movement, which came second in last month’s parliamentary election, did not field any candidate.

Walid Bennani, an Ennahda member of parliament (MP), said: “Our party decided to leave our sympathisers free and we did not support anyone.”

The party’s decision not to present a candidate was aimed at allaying the fears of segments of the urban and coastal population, which fear that Ennahda wants to take over the government to “Islamise” Tunisian society. Ennahada maintains it is a moderate force that upholds the values of pluralism and democracy.

“We believe that the favourites in this election are Essebsi and Marzouki, but nobody will manage to achieve a straight out victory. Tunisians will have to vote again in December,” added Bennanni.

“Essebsi has good possibility to win in the first round,” said Lazar Akremi, a Nidaa Tounes member of parliament.

To win the election, a candidate must obtain over 50% of the vote. If no candidate manages to secure an outright majority, a run-off election is set to take place on 28 December.

A survey conducted on 18 November by Swiss polling agency Satiscan found that the favourite candidate was Essebsi (with a projected 31% of the vote), followed by the independent Mondher Zenaidi (18.9%) and interim president Marzouki (18%).

A total of 69 people initially registered to run in the presidential election but Isie (the state authority responsible for the election) validated only 27. Of these, five quit before the in the run-up to the poll.

One of the former candidates, the independent Mustapha Kamel Nabli, an independent and the former head of the Tunisian Central Bank said he quit because the country’s political mood is “characterised by rising violence and terrorism”. He added that it is a development that “does not allow Tunisians to choose their president with serenity”. Another candidate who pulled out of the election, Noureddine Hached, said that the current political system is too polarised and that this constitutes “a danger for Tunisia”.

Tunisia has witnessed the emergence of Al-Qaeda-inspired militant groups in recent years. The insurgents are based in the mountains along the border with Algeria and have carried out numerous attacks on security forces, public officials, and politicians over the past two years. Some working-class neighbourhoods and towns on the outskirts of Tunis have become hotbeds of militancy and security forces have recently been engaged in gun battles during the course of security sweeps.

Nidaa Tounes MP Akremi said that after the results of the presidential election are announced, the party will begin talks to form a parliamentary coalition. Tunisia’s Assembly of Representatives has 217 seats, with a minimum of 109 required to form a government. Nidaa Tounes is expected to lead a parliamentary coalition but “for the moment we didn’t come to a decision on this subject,” said the spokesman.

During an interview with Tunisian radio station Express FM, Essebsi said that he does not consider Ennahda to be an enemy and that he is open to join forces with Ennahda to set up the new government.

Twenty-two candidates participated in Sunday’s presidential election, 21 men and one woman. The elected president will remain in office for five years.