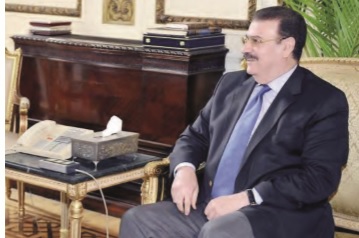 What investment projects are the Ministry of Transportation presenting during the economic summit?

The Ministry of Transportation is in a race against time to complete a feasibility study for the high-speed train project to be presented during the economic summit in March, which includes the construction of one rail line between Alexandria and Aswan and another between Hurghada and Luxor, with an initial estimated cost of $2.5bn.

The aims of the Alexandria-Aswan rail line are to link the north Delta with the Nile Valley with high-speed trains that travel up to 350km/h. The line will be constructed on an elevated path on a bridge and will be completely isolated from both side to ensure the highest levels of safety and security. Five stations will be constructed for the line in Alexandria, Giza, Assiut, Luxor, and Aswan.

A single station has a passenger capacity of 10 million annually. An electric rail line with speeds up to 180km/h will also be built under the high-speed rail path. The electric train will link the capitals of all the provinces along its track line.

The ministry is also studying how to make rail transport account for 10% of goods transport instead of the current 1%, and as such three railway lines will be constructed: a Wahat-Imbaba-Itay Baroud line, a Tebeen-Roubky line, and a 10th of Ramadan-Belbeis line.

The Public Private Partnership Unit (PPP), affiliated with the Ministry of Investment, will prepare for the launch of a number of river ports to increase the share of goods transport through the Nile.

The Ministry of Transport will present an investment opportunity for the underground metro by launching lines 5 and 6 with an estimated investment cost of $6bn.

As for ports, PPP is currently considering launching an industrial port in Safaga.

What is the current situation of the national road network?

Approximately 6% of the national roads project has been implemented, which includes the construction of 3,200 kilometres of roads, but it cannot be completed by a single entity within the allocated time, which is only one year as opposed to the average four years for this type of project. In order for the project to be completed within such a short time, there must be an increase in the number of entities undertaking this project which stands at three. These entities must have the efficiency, technical, and administrative capabilities required, and the main goal is to create new road axis for development and to create urban centres for the eastern ports of Egypt.

The new road network is aimed at linking the west of Egypt with its east, south, and north while also linking the hinterlands recently added to the provinces. This includes linking provinces in southern Egypt with the Western Desert and Red Sea ports. Economic zones will also be linked to local and international commercial traffic such as the Qustel Aswan Road which connects Egypt and Sudan. Egypt’s road network runs for 24,000 kilometres, most of which is more than 60 years old. New roads that are currently under construction and scheduled to be completed within one year only represent around 14% of the current road network, which includes the following:

Despite the fact that road transport is the primary means of goods transport in other countries, the situation in Egypt completely different. How do you explain this?

The amount of goods transported over land in Egypt will rise with the completion of the new road network from 1.5m tonnes to 3.3m tonnes daily. Export-oriented goods will increase from 84,000 tonnes to 260,000 tonnes daily with trip times reduced by 27%.

Maintenance problems waste funds. How are you dealing with this problem?

We are currently pursuing a different ideology based on the principle that maintenance is an investment and not a cost which extends the lifetime of roads and reduces transportation costs in general. We have begun undertaking road maintenance using the latest technology and are currently purchasing asphalt recycling machines, which reduce cost and time. We are also examining the possibility of allocating a separate lane for trucks on main roads which will be conducted by using a special mixture of concrete or asphalt. We need to maintain 2,000 kilometres of roads each year.

What is the Ministry of Transportation’s vision for improving the service level of railways?

Even though we have 9,600 kilometres of railway, this facility registers losses of EGP 1.8bn annually and we have begun enacting urgent reforms beginning in the depots. Railway carriage maintenance operations are set to begin following agreements made with officials, workers and technicians to increase working hours, restructure the depots, and outfit facilities with the equipment and spare parts required. These efforts have in fact been fruitful, resulting in the re-operation of 118 trains that had stopped operations due to political conditions in the country. The depots were able to rehabilitate and develop 150 cars and 25 carriages per month.

We are currently working on improving service quality for vehicles as agreed upon with Semaf, a subsidiary of the Arab Organization for Industrialization (AOI), to begin supplying the first contracted batch. This includes the manufacture of 212 wagons over the next month.

Negotiations are also underway with the Hungarian government to supply 25 carriages and 700 new wagons. Hungary presented the offer, for which funding conditions are currently being examined so that maximum public benefit may be realised. Special attention will be paid to the time period allowed for payment instalments and an agreement to supply the products at the nearest possible date will be made after the final terms are set.

For the depots, we have a new vision focused on utilising foreign expertise. Past models had carriages undergo maintenance abroad, but we need to end this and will now bring foreign experts to Egypt to train workers and technicians. This will help us achieve maximum benefit so that maintenance can be useful, as it represents the railway’s security valve.

Besides depot development, is there an need to develop technical employment and training so that efficiency and performance are up to international rates?

The railway’s top priority now is providing safety and security for train traffic in order to ensure citizen safety, and this was the first step I took after assuming responsibility. Through trips that I made to analyse problems on the ground, I noticed clear negligence in maintenance depots, whether for wagons or carriages. Agreements have been made with officials and workers in these depots to remove work obstacles in exchange for doubling productivity. These measures are aimed at providing whatever is necessary to re-operate trains that ceased to run in recent times.

Work is also underway to develop level crossings in order to secure train paths and reduce collisions with vehicles that cross randomly. Coordination has taken place with governors to close more than 4,000 illegal level crossings along the railway network in addition to the formation of 22 committees in the provinces to collect scraps, which AOI agreed to purchase. We now must admit that, despite the challenges the country witnessed, the service has improved and this due to reusing a number of trains that stopped operating during the last several months.

An agreement was made with the World Bank to finance the import of six new whole train sets in addition to special studies to develop railways (roads and signals) and apply a central control system for railway activity. This new system will allow for rapid intervention in case of emergency, in addition to amending operation schedules to include goods transport.

Seaports are an important trade lifeline for any country, but in Egypt development processes for seaports are long overdue. What are the reasons for this delay?

Delayed port development operations are should be integrated with major projects planned. Thus, the recent delay took place with the goal of achieving the greatest value added for development operations in the Egyptian economy and we now have 15 commercial ports, six of which lie on the Suez Canal Development Axis. The president stressed the need to quickly start launching these projects after a global consulting firm audited studies and plans for the Suez Canal Axis ports and an agreement was made between the consulting firm, the armed forces, and the Suez Canal Authority to complete these studies in no more than three months.

At the same time, other studies are currently being undertaken on Damietta Port in coordination with the Ministry of Supply in order to convert the area into a centre for grain storage silos and trading areas.

The Port of Alexandria has not witnessed any progress since its construction and the consulting firm is currently preparing a general plan for the project as well as studies that will be completed in six months. Based on that, a project will be launched.

How will the funding for port development be arranged?

We will choose between the BOT (buy-operate-transfer) system, in which the state’s contribution is no less than 25%, self-implementation, or state participation in revenues, under which the state is responsible for constructing infrastructure and the investor is responsible for implementing the project at his own expense under state supervision. Under this last system, revenues and management are shared.

What are the latest developments on the Damietta Port issue?

Negotiations are underway to restore the rights of the state from the company managing the port and. We have given them a deadline of the end of the month to begin project implementation, or the contract will be terminated.

The successive stages of the underground metro project will require a huge amount of investments. Have you thought of opening the door for the private sector to participate in the project?

The private sector can participate in the project if the returns on investments are attractive, which is not the case at present because the revenues do not cover operation and maintenance expenses. Right now, there is a deficit of EGP 183m annually.

What is the situation of the fourth stage of the third metro line?

The cost of constructing the final phase amounts to EGP 11bn and will be funded from the state treasury.

The last phase stretches from Haroun Station in Heliopolis to Nozha station with a length of 5.15 kilometres, then moving up to Al-Salam Station (Adly Mansour) by the Al-Asher stop at a length of 6.37km. Another track from Haroun Station through terminal 3 at Cairo International Airport extends 6.65km, bringing the total phase length to 18.17 kilometres with 16 stations.

What stage has the high-speed train line  project reached?

The high-speed train project aims to connect 10th of Ramadan city with the proposed government capital and extends from the 10th of Ramadan station to the Ring Road station, Shorouk, Obour, and then Adly Mansour station, then linking with the fourth phase of the third metro line. The second phase will extend from the Ring Road station to the proposed administrative capital to Badr City and Madinaty, Sherouk, and Rehab. The third phase extends from 10th of Ramadan to Ezbet Selim and Belbeis, then linking with Rehab and Adly Mansour stations. The project will be constructed across three phases will include 16 stations.

China has provided $1.2bn in the form of a soft loan for project construction. China will take over the financing and construction of this national project to connect industrial areas of 10th of Ramadan to Cairo and Belbeis.