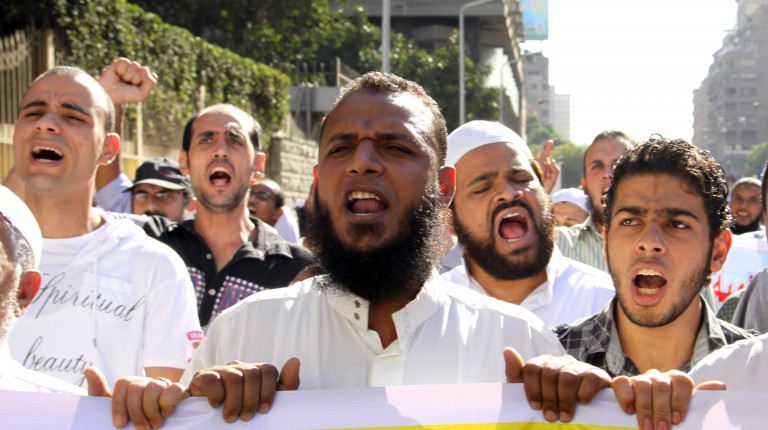 Allam described the calls as “attempts to humiliate the holy book and involve it in political disputes”.

Islam asks people to unite and cooperate and warns against division and disputes, Shawqy said in a video on Dar Al-Ifta’s official page. “Those who call for these protests do not acknowledge the critical situation the country is going through”, he said.

Shawqy added: “Although we fight extremism and takfiri ideology, we assert that the basics of Islam should not be questioned.”

“Such scepticism as well as the degradation of morals provoke Muslims and is a fuel for extremism,” Shawqy said.

The calls to protest on 28 November were launched by the Islamist political organisation, the Salafi Front, to restore “the [Islamic] identity and Sharia Law”.

The front, which gave the protests the name “The Muslim Youth Uprising”, cited different reasons for the new wave of dissent.

A flyer distributed by the front says: “When the president says that demanding to establish the Islamic caliphate is terrorism, when the mosques are destroyed in Sinai, and when teaching dance, homosexuality, and premarital sex are present in media and school books, an Islamic uprising is a must. There is a war on Islam and its teachings.”

The group added that the aim of the uprising to “bring back our morals and traditions”, adding that without them “the country will not develop or prosper”.

A number of Salafi groups agreed with the Salafi Front’s argument which preach “a fight for identity”, while others described the calls as “violent”.

The Anti Coup Alliance, a group of parties opposing the current regime, released a statement Wednesday supporting the “youth calls to impose their [Islamic] identity”. It asked the Egyptian people to join the “million man march on 28 November”.

So far the government has been vocally opposing the calls, and the Ministry of Interior vowed to deploy heavily equipped troops to quell any dissent on 28 November.

Also on Wednesday, police said they arrested ten members of a “terrorist cell calling for an armed Islamic revolution”. The suspects were arrested possessing flyers calling people to protest, melee weapons, Molotov cocktails, and flags with logos of the Islamic State in Iraq and Al-Sham (ISIS), a Ministry of Interior statement said.