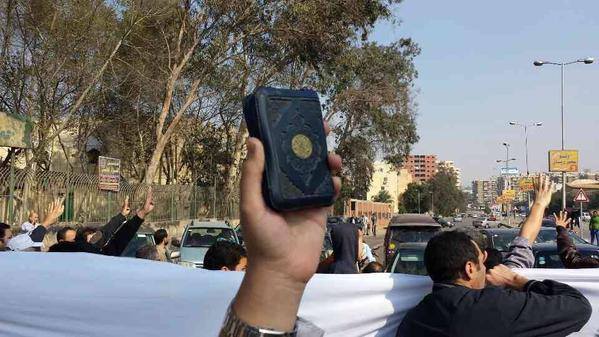 Two died in clashes between protesters and security forces in Cairo on Friday.

Ministry of Health spokesperson Hossam Abdel Ghaffar said one man was killed and several others injured in Matariya neighbourhood.

The Ministry of Interior announced a second death, saying that in Ain Shams and Matariya “hundreds of Muslim Brotherhood group [members] gathered, where some of them fired birdshots and live rounds randomly at passerby”, killing one.

The ministry arrested 12 protesters, while possessing weapons and laptops. One of the suspects is a member of the Helwan Brigades, the ministry said.

Abdel Ghaffar told Daily News Egypt that the first deceased is a 42-year-old male, and was sent to the Matariya governmental hospital, adding that the number of injured may increase.

The Freedom and Justice Party, the political wing of the outlawed Muslim Brotherhood, confirmed the incident, adding that the deceased’s name is Mohamed Hassan and was killed after “security forces attacked a demonstration coming out from a mosque”.

Mostafa Mahrous, one of the friends of Hassan told Daily News Egypt that they were peacefully protesting in a demonstration from Al-Rahman Mosque. “When we reached Matariya Square, an armoured vehicle started firing birdshots and live rounds.”

“Hassan and others were shot. Security forces aimed at the head and the neck. We had to drag his body as the vehicle were running over the bodies,” Mahrous said.

He added that the police’s usage of force is “against the standards of human rights”.

However, the Salafi Front claimed so far five protesters were killed in Matariya, adding that police and army forces are dispersing the protests.

An eyewitness told Daily News Egypt that police and army forces tightly secured the areas of Ain Shams and Matariya, and that military helicopters are flying over the districts.

In Downtown Cairo, state media reported the explosion of a sound bomb near Abdel Moneim Riyadh Square, with no injuries.

According the MOI’s media spokesperson, security forces arrested 25-year-old Mohamed Amer after he threw the bomb from 6th of October Bridge into Abdel Moneim Riyadh Square.

Protests started after the end of the Friday prayers, with protesters carrying copies of the Quran. The ultraconservative Salafist Front had called for mass protests this day to impose Islamic rule and preserve Egypt’s “Islamic identity”.