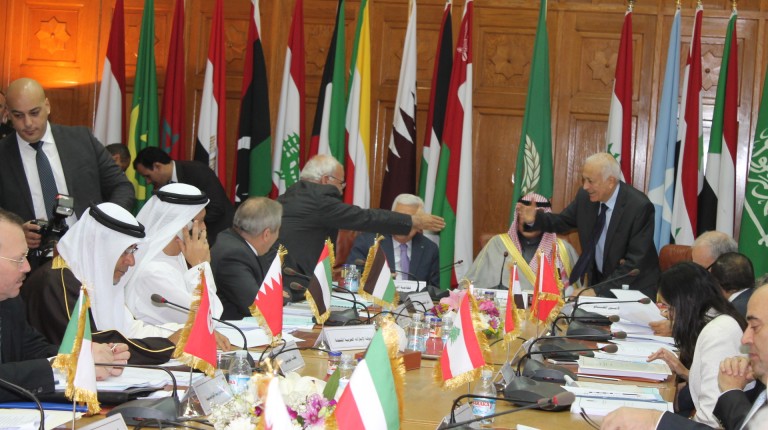 Arab League Secretary General Nabil El-Araby met with the Jordanian and Kuwaiti foreign ministers on Saturday to discuss the latest developments in Palestine.

During their meeting, the ministers also discussed the endeavours in the United Nations Security Council to support the Arab World’s resolution to end the Israeli occupation in Palestine.

The discussions come on the same day of the Arab League Council of Foreign Ministers meeting scheduled on Saturday. Both meetings were aligned with “the International Day of Solidarity with Palestinian People” as observed by the UN on 29 November.

During meeting with El-Araby, Abbas highlighted the endeavours in the UN Security Council to determine a timeframe for ending the Israeli occupation in Palestine. This comes in addition to the threat posed by “Israeli escalations which aim at changing the features of Jerusalem through the successive incursions of Al-Aqsa Mosque”, according to a Friday statement by the Palestinian Embassy in Egypt.

The statement read that Abbas warned against the consequences of getting dragged into a religious war.

In October, Israeli settlers stormed into Al-Aqsa mosque, the thirst holiest site in Islam, whilst worshippers were praying. Israel has since then imposed restrictions on worshippers entering the mosque, only allowing Palestinians above the age of 50 into the compound.

Tensions have heightened between Israelis and Palestinians. Earlier in November, two Palestinian militants carried out a knife and axe attack on worshippers in a synagogue in the Har Nof neighbourhood in West Jerusalem. The attack left five Israelis dead. Israeli police shot and killed the militants.

The attack was claimed to have been committed by two members of Palestinian group the Abu Ali Mustapha brigades, the armed wing of the Popular Front for the Liberation of Palestine. The group defended the action, calling it a “natural response to the crimes of the occupation and a form of popular resistance”.

Abbas condemned the attack on the synagogue but noted that there should be an “end to the intrusions of the Al-Aqsa Mosque, the settlers’ provocations and incitement of some Israeli ministers”.

Israeli Prime Minister Benjamin Netanyahu ordered the demolition of the homes of both attackers. He commented on Abbas’s condemnation of the attack as “good” adding that “it’s not enough”. He also blamed Hamas and Abbas for the attack describing it as the “direct result of the incitement being led by Hamas and Abu Mazen [Abbas], incitement which the international community is irresponsibly ignoring”.

El-Araby’s meeting with Abbas also addressed the efforts of the national reconciliation government for the reconstruction of Gaza.

Egypt and Norway jointly hosted the “Reconstruction of Gaza” conference in October. Over 90 countries and international organisations participated in the conference following the 50-day conflict between the Palestinian factions in Gaza and Israelis ending in August. A total of $5.4bn has been pledged for the reconstruction of the Gaza Strip.

Continued Egyptian brokered indirect peace talks between the Palestinians and Israelis were planned following the conference, but were postponed indefinitely due to security issues in the restive Sinai Peninsula.

President Abdel Fattah Al-Sisi is expected to meet Abbas to discuss the latest developments in the Palestinian territories and the former’s efforts to promote the peace process during his recent tour of Europe.

Al-Sisi met French President Francois Hollande for regional talks which was later described by Al-Sisi as “fruitful”, addressing the situation in Palestine among a range of topics.

The duo agreed on “exerting all possible efforts” to solve the situation in Palestine through encouraging the Israeli and Palestinian sides to continue the peace process.

Al-Sisi noted that if the situation is resolved, it will represent a great shift regionally and possibly internationally. He added that it is important for “Palestinians to possess a state with its capital East Jerusalem” adding that this would give the Israelis a chance to exist in a way “that is convenient to Israelis and the rest of the region”.