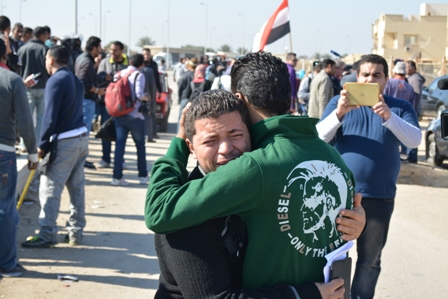 Relatives of those killed in the 25 January Revolution said that the judiciary is controlled by the state and politicised, while supporters of Hosni Mubarak  celebrated, following the court verdict  dismissing the former president, his interior minister Habib Al-Adly, and six former security officials from charges of murdering protesters during the 25 January Revolution.

Ahmed El-Saed Ibrahim was wounded during the Friday of Rage, on 28 January 2011, in the city of Mahalla.  El-Saed collapsed in tears after hearing the verdict saying “the revolution has been stolen”.

Um Tamer, who’s son was killed in Marsa Matruh during the 28 January protests fainted after the acquittal, and said that the “blood of her son has gone in vain”.

Another man who lost his son in the same events said: “We are now living in the country where the rich can easily oppress the poor, while the judiciary stands still.”

He added that if Mubarak was acquitted, then “former president Mohamed Morsi should be set free”.

Other anti-Mubarak protesters said the verdict means the current government collaborated with Mubarak and set him free. They added that “President Al-Sisi must intervene to make sure the blood of the slain protesters are avenged”.

The angry protesters vowed that this verdict will create a new revolution and will unite Islamists and non Islamists against the regime of Al-Sisi.

Mubarak supporters gathered early Saturday morning chanting for Mubarak, demanding his release along with that of his sons and officials. After the verdict, they cheered in joy, praising the judiciary, the army, the police and President Abdel Fattah Al-Sisi.

“What are we trying him for? For 30 years of security and prosperity? Or for the October victory?”, another supporter said.

Eman, a 22-year-old student who came with her family to celebrate the verdict, said that “the court’s decision proves that the last four years was a plot by the West, Qatar, Hamas, and Israel”.

Police forces separated between the two sides, fearing any clashes might take place. Although no clashes happened police forces were heavily stationed outside the court with special forces and masked troops from the Central Security Forces.

A police general at the scene, who requested anonymity, told Daily News Egypt that a large amount of soldiers and officers were deployed to secure the court from outside. He added that this is due to the violent threats by “terrorist groups on 28 November”.

A large number of pro-Mubarak supporters headed to Mubarak’s hospital in Maadi to continue the celebrations.

After the verdict was announced riot police blocked the road in front of the Police Academy, and formed a human shield to separate the two sides.