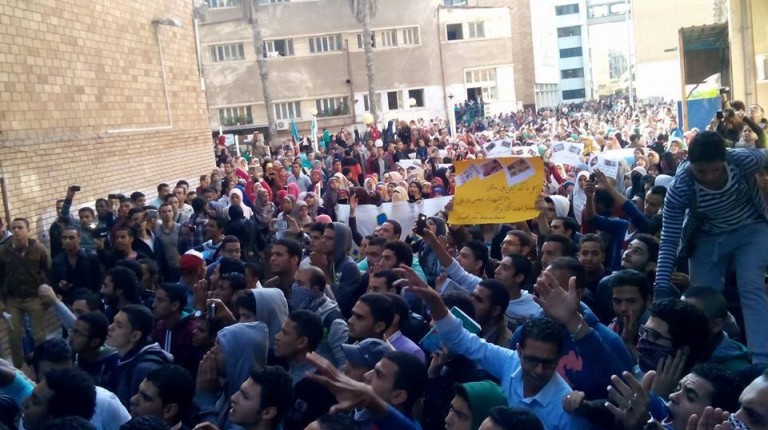 Students at universities around the country protested against Saturday’s controversial decision by the Cairo Criminal Court to dismiss murder charges against former president Hosni Mubarak.

The Revolutionary Front, a coalition of political movements, called on Saturday for protests at 11 different universities around the country to take place on Sunday. The call came following the dispersal of a demonstration on Saturday evening in Abdel Moneim Riyadh Square adjacent to Tahrir Square, which the security forces closed off following the announcement of the court’s decision. The dispersal and resulting clashes caused the death of at least two people.

Protests occurred in Ain Shams, Al-Azhar, Cairo, Alexandria and Zagazig universities according to a Students Against the Coup (SAC) statement, which stressed that several other groups were involved in the protests.

In Cairo University, students blocked one of the gates of the university to prevent the police from entering campus, according to SAC Spokesman Ahmed Nasif. He added that clashes occurred between students and campus security in Zagazig University.

Nasif stated that SAC is cooperating with the 6 April Youth Movement on campuses and welcomes any other movements under the slogan: “Down with the military regime, retribution, and achieving the goals of the revolution.”

In Ain Shams protesters were reported to have sung: “The revolution is dying so we have to mobilise, otherwise the regime will annihilate the revolution”. In Al-Azhar they chanted “one hand” as a sign of unity, and in Cairo University the 6 April Youth Movement reported protesters chanting for the fall of Mubarak and current President Abdel Fattah Al-Sisi.

Mubarak, his sons, his former interior minister and six ministerial aides were found not guilty on charges of corruption on Saturday. The judge said he was unable to rule on the charges relating to the murder of protesters during the 25 January Revolution, which resulted in Mubarak’s resignation.