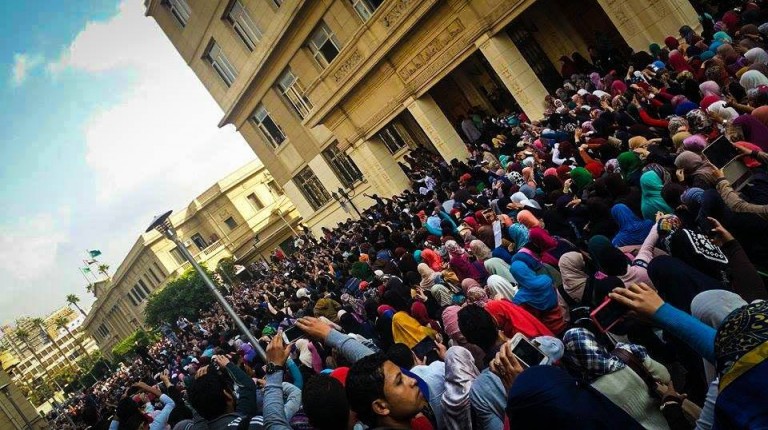 Students Against the Coup (SAC) called the verdict “staged and chaotic”. It added that the state does not respect human rights as “those who oppressed and killed the people for 30 years were set free”.

The movement called upon students and protesters to take to Tahrir Square to protest the verdict, and vowed to stage new protests on-campus to “ensure that a fair trial takes place”.

The group denied the existence of an independent judiciary, saying: “While students receive harsh sentences including death penalties, Mubarak is acquitted.”

The 6 April Youth Movement condemned the verdict, describing it as “void” and calling upon people to head to Tahrir Square and protest. The student segment of the movement vowed to stage protests in university campuses, to relive the “three-year-old scene where all segments of society were united”.

Former presidential candidate Abdel Moneim Abul Fotouh said via his Twitter account that Mubarak’s verdict should be considered “a beginning of a new stage to struggle and learn from our mistakes. The people’s verdict on Mubarak has not changed”.

Abul Fotouh is the head of the Misr Al-Qawia Party, which issued a statement Saturday saying that “the verdicts were expected amid the control of the current regime”.

The party added that the verdict shows that the Egyptian people have two options, “the revolutionary way, where equality, citizenship, and justice are served; and the way of counter revolution”.

“Our revolution didn’t demand the fall of one person but demanded the fall of the regime,” the party said. “We in the party are still loyal to the objectives of 25 January to establish a new country based on freedom and social justice”.

Hala Shukrallah, head of Al-Dostour Party, said on her official page that the verdict is “frustrating and pulls back the Egyptian people to the pre-revolution era, all in the name of the fight against terrorism”.

She added that the party condemns and will protest the verdict, to “remind society and the people that a revolution took place to oppose oppression and tyranny”.

The main objective now is to “build a society that establishes democracy”, Shukrallah said.

Al-Dostour Party vowed Saturday evening in a statement that it will cooperate with other parties, constitutional experts, and political movements to re-try Mubarak on charges related to “oppression and election fraud”.

“We respect the decision of the judiciary; however the verdict confirms that the charges should not have been presented in front a criminal court in the first place,” Al-Dostour Party said. “This is because there was no collaboration from the security forces to present the necessary evidence to the court.”

The Popular Socialist Alliance also said that it is considering the possibility of collaborating with other parties and movements to stage a retrial of Mubarak. The party said that it joins the Egyptian people in their grief and anger, adding that the nation has found Mubarak and his regime guilty.

The Egyptian Initiative for Personal Rights (EIPR) said Saturday that the verdict is “another severe blow to justice” in the country.

The verdict establishes “the security institution’s impunity and reflects the current political atmosphere”, said Hoda Nasrallah, a researcher at EIPR.

Transparency International, the global anti-corruption organisation, said the acquitting Mubarak from corruption charges is “a serious setback in the effort to fight graft and the abuse of power”. It added that it is a reversal “of one of the most important outcomes of the Arab Spring”.

The organisation added that the verdict “sends a message that leaders can get away with decades of running a country while coffers are stripped bare”, said Transparency International’s Chair Jose Ugaz.

Prosecutor General Hisham Barakat ordered Saturday a study into the legal “reasons” behind the sentences by the Cairo Criminal Court. The study will be carried out by the technical office of the general prosecution.

Transparency International announced its support for the prosecution’s efforts to appeal the verdict and the legal reasons behind the decision.

The Anti-Coup Alliance, a coalition of parties and movements opposing the current government, said that the verdict proves that the “judiciary is politicized and that the counterrevolution is aiming to destroy the 25 January Revolution”

Laila Soueif, mother of two currently detained political activists, Alaa Abdel Fattah and Sanaa Seif, condemned the verdict saying that it is new evidence that “the Egyptian judiciary is nowhere near justice”.

Soueif, a Professor of Mathematics at Cairo University and the founder of the 9 March Professors’ Movement for Universities’ Independence, said “there have been verdicts issued against protesters without clear charges”.

In June, Abdel Fattah and 24 others were sentenced in absentia to 15 years imprisonment, paying an EGP 100,000 fine and put under police observation after release, on counts of violating the Protest Law.

According to Soueif, Alaa was expecting the verdict, but was impressed by the responses it has provoked, after she visited him this morning.