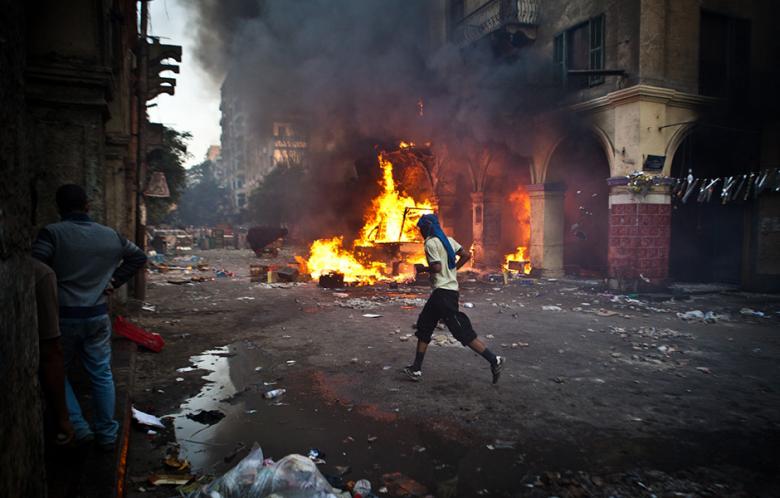 Cairo Criminal Court has adjourned the “Fatah Mosque clashes” verdict to 6 January during the first court hearing Monday at the Torah Police Institute, due to the absence of defendants.

State media said that the “defendants were unable to attend” the trial. The Ministry of Interior is the authority responsible for transferring detainees to court.

The prosecution accused 494 defendants, allegedly belonging to the Muslim Brotherhood, of murder and attempted murder. The defendants were also charged with vandalising the Al-Fatah Mosque, located in Ramses Square, and of interrupting prayers there. These charges come in addition to vandalising public property, holding fire weapons, and blocking public roads.

Two days after the Rabaa Al-Adaweya sit-ins dispersal by security forces, Muslim Brotherhood supporters called for a protest under the slogan “Friday of Anger” in Ramses Square.

The protests were soon dispersed by security forces, and the ensuing clashes between protesters and police left 44 dead and 59 injured. No members of the police were among the deceased, but 22 were injured.

A group of the protesters barricaded themselves inside the mosque in fear of being shot or arrested by the police, but security forces then stormed the mosque and proceeded to arrest 494 individuals.

In August, Mahmoud Kamel Al-Rashidy, the judge who also presided over former president Hosni Mubarak’s trial, excused himself from the case. He transferred its papers to the Cairo Appeal Court to decide which circle of the Cairo Criminal Court should follow up on the case.

One of the defendants, Irish citizen Ibrahim Halawa, wrote from his prison: “I didn’t get to talk to my lawyer and the court cage was sound-proof (the one I didn’t even enter). We were beaten up, dragged down the stairs, handcuffed in threes, we were spat on and all this just because we refused to leave until we were to see a judge.”

Halawa was only 17 when arrested, a minor according to Egyptian law. According to his sister, no evidence has been provided to show that Ibrahim was ever involved in any illegal activity – instead he has been arrested for peacefully exercising his right to freedom of expression.

Ibrahim’s family is concerned that he will become locked into a continuous cycle of solitary confinement extensions without ever having fair legal process. The Halawa family urge the government to demand for Ibrahim’s immediate release.