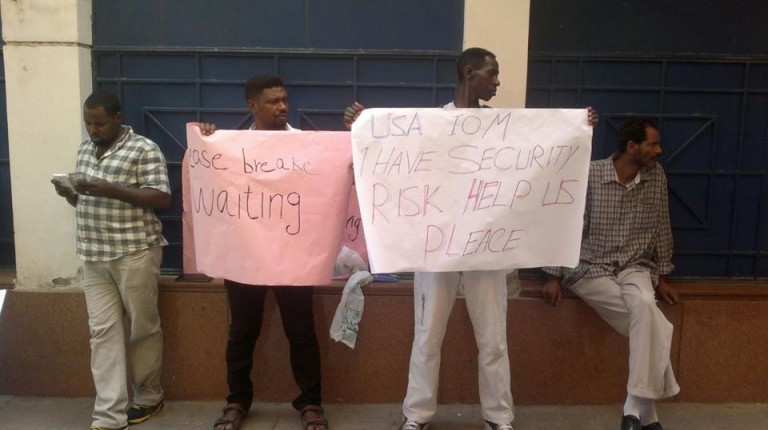 July 2014 was a bad month for the family of Abdel Hamid, a Sudanese refugee and father of six.  His 18-year-old son Mujahi was returning home from a friend’s house in the Ain Shams district of Cairo, when a group of Egyptians approached him from behind and hit him on the back of the head with a blunt object. As Mujahi fell, the assailants began to punch and kick him.  One of them pulled out a knife and tried to slash his face, but the blade sliced into his right arm just above his elbow cutting his tendons and radial artery as he was covering his face. Luckily for him, people on the street chased away the attackers and rushed him to Ain Shams hospital before he bled to death.

He now cannot close his right hand or make a fist, nor can he hold a pen. The scar left on his arm resembles a broken circle, the scar on his head a permanent bald spot.  The doctor said he would be able to gain use of his hand again through physical therapy. The family cannot afford it.

During his recovery, or perhaps due to stress because of the attack, his mother, Naiad Algo Sukar developed thyroid problems.  The medication for her recovery has been added an extra living expense to Abdel Hamid, who works cleaning cars for about 12 hours a day, six days week for approximately EGP 1,000 a month.

Mujahi said he does not know exactly who assaulted him or why.  He doesn’t even know how many there were. The family believes that he was assaulted because he was Sudanese.

To avoid another potentially lethal situation, Abdel Hamid immediately moved the family to Nasr City, though the new location has not proven much better safety-wise.

Young Egyptian men in the neighbourhood grab him and brandish knives and call him out to fight, Mujahi says.  The initial incident has left him terrified of leaving the house, infrequently going out even for school.

The problems facing the Hamid family represent the main issues faced by Sudanese refugees in Egypt: lack of security, poor medical assistance, low income work, vulnerability to crime due to their refugee status, and becoming the victims of racially motivated assaults.“Attacking Sudanese people actually began three years ago,” Abd El-Monem, head of the Nuba Association, a community association for Sudanese refugees.  Recent assaults have coincided with the general break down of security after the 25 January Revolution.

“During  the revolution of 25 January  almost 45,000 refugees came into Egypt through the borders because there was no supervision on the borders of Egypt,” said Mohamed Saeed, a lawyer specialised in refugee affairs for the Egyptian Coalition for Rights and Freedoms.

The United Nations Refugee Agency (UNHCR) estimates there are currently 230,000 refugees in Egypt .

There has also been “an increase of xenophobia, in general, but some groups of refugees face further problems than others. This could relate to the physical features that identify the person as non-national, also the language barrier that some persons of concern face could also add to their hardship,” said Karmen Shakr of the UNHCR Senior Protection Office.

Talgadeen Hasbeldeen, from Darfur and who has lived in Egypt for over five years, said attacks on Sudanese have become common: “There is no protection for us here. All Sudanese have dealt with Egyptians beating them.”

He mentioned a particular joke that begins with an Egyptian man asking a Sudanese person about the time, with the Egyptian immediately bringing his wrist next to the Sudanese arm to contrast the difference in skin colour. Hasbeldeen, like many Sudanese, finds the joke offensive, seeing it as an instigation for a fight.

One evening in November 2011, Awad Sliman Hagona, a 40-year-old Sudanese father-of-two was killed with repeated strikes to the skull using a heavy object.  The Nuba Association in Asher agitated for the arrest of those involved in the attack, but the only man detained in the attack has been released.

“Several men who attacked him are opening up a business not too far from our association,” said Kamel Jumah, a relative who rushed to the location of Hagona’s murder on the night he was killed.

“We want to fix the problem this way but we let the police handle it.  The police do nothing because they are on the side of the Egyptian people,” Jumah said.

Though refugees have access to the Egyptian justice system, Shaker said: “The practice is more challenging when it comes to getting a response from law enforcement and protection when the issue is related to general lack of security.”

El-Monem blames the lack of justice due to police incompetence, an ineffectual legal system, and casual racism by the authorities.

The Nuba Association, headed by El-Monem, is one of many communal organisations that have formed on the outskirts of Cairo replicating the environment of their home country.

There, Sudanese gather to discuss grievances and job opportunities, take advantage of babysitting  and the nursery provided, celebrate holidays, and offer each other support in, gossip and protection.

“Egyptians might not think they’re doing something wrong. This is the same problem people were suffering from in Sudan” El-Monem said.

Although the centre has been a shelter it has also been a target for attacks.

One week, celebrations with traditional Nuba dancing and festivities were met with rocks and bottles.  The association is careful to plan all festivities quietly now.

In January 2014, a scuffle broke out in 10 Ramadan City when several Egyptians involved themselves in an argument amongst six Sudanese. The situation quickly escalated where the six men were chased down to the association by 25 Egyptians who attacked them with knives and pipes. Three of the Sudanese were taken to the hospital.

On a packed Friday, every member of the association admitted to being threatened for their money. Many of them experienced multiple robberies, and though none of the members knew the actual name of the street behind the building, they all knew the street by its nickname: “criminal street”.

“The Nuba mountain person is simple. We’re simple people. We don’t want to get involved in violence or problems. There’s a big difference between us and the people here”, said Moneim. “We’re not big city people. We’re small town people. We’re used to big spaces and many different types of religions.”

Just around the corner from the Nuba Association and the Hamid family, lives Susan Lina Hassan, a mother of three, whose 12-year-old daughter was pushed off a staircase, landing face first into the side of a motor cycle. Her daughter now has a scar from the top of her head just above the middle of her eye brows to the left side of her chin. Like the Hamid family, Hassan neither knew who did it or why, though she suspects it is because she was Sudanese.

While Hassan was leaving work one day, an Egyptian man walked into an elevator as it closed pulled out a knife, grabbed her, and told her to take off her clothes. Hassan, not one to go down without a fight, kicked the man in the crotch and attempted to wrestle the knife away from him. When the elevator door opened, she managed to get away without harm, but tripped on the side of the pavement as she ran and broke a rib.

Harassment and sexual abuse continues to be one of the biggest problems facing refugees in Egypt along with “hunger, poor health and living conditions, lack of basic medical care”, according to Justine Jacobs, former Head of the Capacity and Livelihoods programme at Refuge Egypt, a NGO providing services to refugees fleeing war and disaster.

“There is a lot of sexual harassment on or around the job and physical abuse,” said Rashida Basha Rehda, women’s leader at the Nuba Association. Rehda also mentioned cases of blackmail involving false accusation of theft against Sudanese women who worked as maids and babysitters.

“Most refugees find work as live-in or part-time house cleaners and babysitters. Because domestic work in Egypt is conducted “under the table” without legal rights or protections, many of these refugees are overworked, underpaid, and suffer from physical and/or sexual abuse”, added Jacobs.

The salary of most Sudanese at the association ranged from EGP 1,000 – EGP 1,200 a month for 12 hours days over 6 days a week, usually in cleaning or construction, where they are prone to injury and not allowed breaks.  Women generally make less as housekeepers and baby sitters, said Rehda. She knew one woman who made EGP 800 a month as baby sitter.  The average monthly rent in 10 Ramadan City ranges from EGP 400 – EGP 600.

“Refugees can’t find work here, some have skills, but many refugees can’t support themselves so they’re desperate to work. They get low paying jobs or dangerous jobs,” Jacobs said.

In 10 Ramadan City, mother-of-four Mona (not her real name), is particularly keen to avoid the police. The UNHCR closed her case with her unable to be added to her husband’s file as a refugee. She is presently residing in Egypt illegally.  Though security forces usually do not stop women, she  said: “If she is not careful, she can be detained and sent back to Sudan because she has no documents to protect her.”

After dropping off her kids at the bus stop to school, she makes a quick pace back to her apartment. She is wary of locals’ behaviour and often tells her children to stay at home after her eldest son was sent to run an errand and came back with a bloody cheek after some boys hit him.

“It is a regular procedure to stop and detain Sudanese men on the street,” El-Monem said. Often police ask Sudanese for their documents. “They are usually held for seven days minimum”.

Jumah who sells wallets, perfumes, bags, purses, and watches on the street was detained three times in a two by three meter cell with 18 men. The police who arrested him asked for a bribe of EGP 100 pounds, but he said: “Even If I had 100 pounds the police wouldn’t get it from me.”

“If there is a problem, they lay the burden down on the foreigner. For the police the foreign bodies are to blame,” Mohamed Baha Ali, a Sudanese refugee in Dokki.

Omar Ahmed Okail an Egyptian medical representative who often works in the 10 Ramadan area said: “It’s not so much violence between the groups, I think most Egyptians ignore them in the 10 Ramadan area, even though they make up 25% there. Most of the time we ignore them and they ignore us because of the cultural and language difference, but I think Egyptians look at Africans as lower than them, like the way Americans who come to Egypt look at Egyptians as lower than them, meaning they are poor and have no education.”