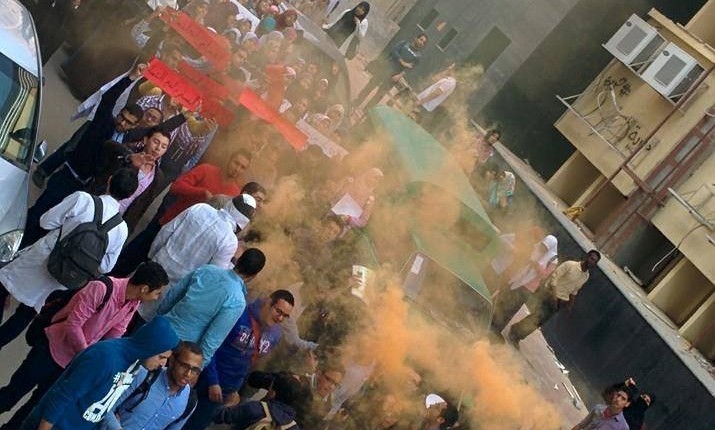 Students nationwide staged demonstrations on Tuesday, expressing anger against the Cairo Criminal Court’s decision to drop charges against former president Hosni Mubarak, his sons, and the former minister of interior.

The Students Against the Coup (SAC) group promised to carry out demonstrations in response to the dismissal of charges against “members of the corrupt Mubarak regime”. At the same time, it welcomed different student movements to participate in their protests on campuses.

In Fayoum University, security forces dispersed a protest chanting against the judiciary. In Assiut University, students chased members of the private Falcon Company out of campus, as they roamed the university in big crowds.

Protests took place in universities in Menufiya, Beni Suef, Al-Azhar, Ain Shams, as well as at the 10th ofRamadan Institute and Al-Azhar University branch in Zagazig, amid heavy security presence.

On Saturday, the group called the verdict “staged and chaotic”, calling upon students and protesters to take to Tahrir Square to protest the decision. It vowed to stage new protests on-campus to “ensure that a fair trial takes place”.

The group denied the existence of an independent judiciary, saying: “While students receive harsh sentences including death penalties, Mubarak is acquitted.”

Abdel Moneim Riyadh Square in Cairo has witnessed anti-Mubarak and anti-government demonstrations, following the dismissal of the case against former president Hosni Mubarak on Saturday morning.

Thousands gathered in the square adjacent to Tahrir Square on Saturday evening to protest against the verdict. The violent dispersal of those demonstrations left two people dead.

SAC is a student group formed after the ouster of former president Morsi to oppose the current regime and the government of President Abdel Fattah Al-Sisi.