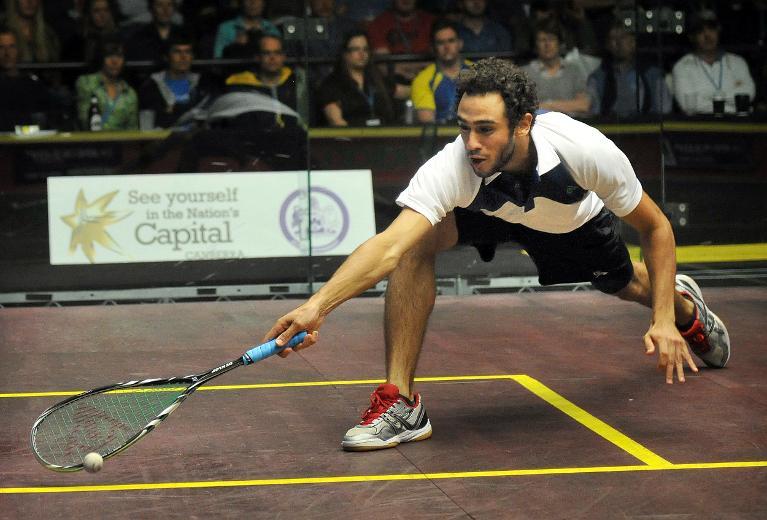 For the seventh time in its history, Egypt came in first place in the World Squash Championship in Doha, after Ramy Ashour, who previously ranked fifth in the world, was able to defeat his compatriot Mohamed Shorbagy, who ranked first, with a result of 3 against 2 in the final exclusively Egyptian game.

Ashour, 27, has gained his third world title following his wins in 2008 and 2012. This is also his second defeat against Shorbagy, 23, after he defeated him in 2012 with the same score.

Ashour jumped ahead of two defeats in the first 2 sets, ultimately winning by 3. Ashour was at the top of the rankings for 1.5 years until he returned to the courts and earned the world title, after failing to play since the start of the year due to an injury.

In contrast, Shorbagy failed to the win the world title for the second time in his career, although he prevented the former English world champion Nick Mathew, currently ranked third worldwide, from achieving the title three times.

Egyptian players occupy four out of the top ten ranking spots according to the World Squash Federation, boosting Egypt’s opportunities in the upcoming phase. This brings the nation closer to surpassing Australia, which has eight titles, and inching toward Pakistan with the highest number of titles in the championship – a total of 14.

Aside from Shorbagy and Ashour, Amr Shabana came in 4th place, while Tarek Momen came in 9th. Egypt also has a number of promising players in extended classifications like Marwan Shorbagy who is 14th place and Karim Abdel Gawad in 19th.

Pakistani Jansher Khan is the player with the highest number of World Squash Championship titles with a total of 8, the last of which was won in 1986. He was most recently followed by his compatriot Jahangir Khan in 1996, with 6 titles followed by Australian Geoff Hunt with 4 titles in 1980 who is currently tied with Egyptian Amr Shabana. Shabana won his last title in 2009, but Hunt reached the final 5 times compared to Shabana’s four.