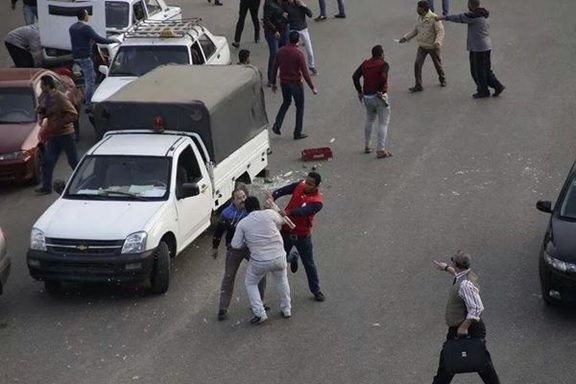 Men brandishing broken glass bottles attacked demonstrators during a small protest next to Tahrir Square on Friday evening, according to a BBC reporter who was on location.

The BBC’s Orla Guerlin, who is currently based in Cairo, reported via Twitter that her colleagues filmed men in plainclothes attack with glass bottles the few protesters that had gathered.

Later in the evening an unverified photograph circulated on Twitter that seemed to corroborate the BBC staff’s reports.

The protests were called by the 6 April Youth Movement, Constitution Party, Revolutionary Socialists, Youth for Justice and Freedom, and Strong Egypt Party. The protests were in response to the Cairo Criminal Court’s decision to dismiss all charges against former president Hosni Mubarak on 29 November.

Despite much online discussion and sharing prior to the planned protest, turnout was low, amid a heavy security presence.

Last Saturday, following the court’s dismissal of charges against Mubarak relating to the killing of hundreds of protesters during the 2011 uprising that toppled him from power, thousands of protestors gathered at Abdel Moneim Riad square, next to Tahrir Square.

The crowd was dispersed later in the evening with tear gas and water cannons. Health ministry spokesman Hossam Abdel Ghaffar said that two protestors died and 15 were injured in the clashes as security forces cleared the area.