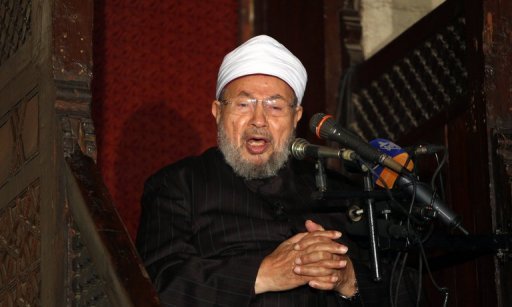 The International Criminal Police Organization (Interpol) issued on Friday a high level alert in a bulletin seeking arrest of the Islamic cleric Yusuf Al-Qaradawi , head of the International Union for Muslim Scholars and a lifelong Muslim Brotherhood supporter.

Interpol stated that the Qatar-based sheikh is wanted by the judicial authorities of Egypt to serve a sentence. He is charged with agreement, incitement, and assistance to commit premeditated murder, facilitating a prison escape, as well as involvement in arson, vandalism, and theft.

Prosecutor General Hisham Barakat requested Interpol to arrest Qaradawi and turn him in to Egyptian authorities in December 2013.

The 88 year-old faces charges alongside ousted Islamist president Mohamed Morsi and 129 others for a mass jail break that was allegedly carried out with the help of Hamas and Hezbollah during the 2011 uprising that ousted Hosni Mubarak.

Qaradawi had urged Egyptians to boycott last May’s presidential elections, which President Abdel Fattah al-Sisi won. Qaradawi had also published a fatwa on his website calling the 30 June events a military coup, and urging all Egyptians to support ousted president Mohamed Morsi to restore him to his “legitimate post.” He also claimed that Al-Sisi had consulted personalities who “do not represent the Egyptian people,” including Ahmad Al-Tayeb, Grand Imam of Al-Azhar.

Al-Qaradawi was stripped of his citizenship by former president Gamal Abdel Nasser. He was arrested under Egypt’s King Farouk in 1949, then again under Nasser in 1956 and later in 1963. He then fled to Qatar, where he became a citizen in the 1970s.

After the January 25 Revolution Qaradawi made his first public appearance in Egypt in Tahrir Square when he led Friday prayers on 18 February, 2011.

In 2004, Qaradawi refused the leadership of Egypt’s Muslim Brotherhood for the second time.

Qaradawi had been banned from entering the US since 1999 and UK since 2008. Authorities also refused him entry into France.

The Al Jazeera television network has been broadcasting Qaradawi’s programme “Shariah and Life” for the past 18 years. His fatwas in support of suicide bombings against Israeli civilians sparked considerable controversy.  Hi son, Abdurrahman Yusuf al-Qaradawi, is a poet and a political activist in Egypt.