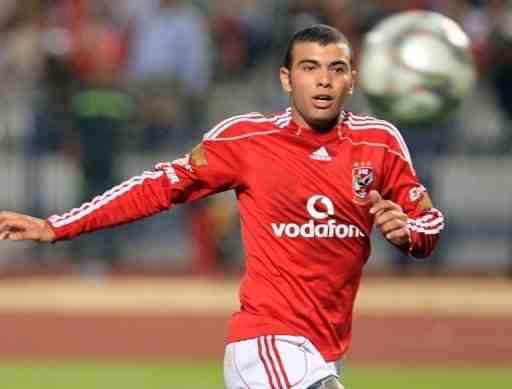 The tiring one, the goal-keeper’s torturer, the sniper – these are all names Al-Ahly fans have used to describe their favourite talented striker Emad Motaeb who had been absent for an extended period due to injuries that prevented him from invading competitors’ nets. However, Motaeb has now returned with a persistence and will that jives well with what we know about the players of the “Red Fort”.

The return of the team’s biggest scorer was triumphant, with Motaeb scoring the winning goal against the Ivory Coast’s Séwé Sport, bringing Al-Ahly its 20th continental championship title in a scene similar to the qualifying match for the World Cup in 2010.

Motaeb is considered the third greatest scorer for Al-Ahly in African championships throughout the club’s history. Counting his last goal, he has scored a total of 23 over nine years in 70 matches, with an average of one goal every three African matches he participated in.

He came in third for his goal-scoring in African championships after Mahmoud El-Khatib who scored 37 continental goals for Al-Ahly, and Mohamed Abou Trika, who scored 32 African goals.

Motaeb had not scored for Al-Ahly in Africa since his last winning goal in May 2013 against Tunisian team CA Bizertin in the round of 16 for the Champions League. He then scored a precious goal against Ivory Coast’s Séwé Sport after his almost two-year absence.

He first scored in Africa in March 2005 against Uganda’s SC Villa in the round of 32 of the African Champions League, which ended with six goals for Al-Ahly, all scored by Motaeb.

Motaeb’s most recent goal was in Al-Ahly’s latest African match, leading the team to take the championship. He has a history of scoring some crucial goals that have affected Al-Ahly’s career path. Fans will never forget the 2005 championship where he outperformed everyone with his six goals.

He also helped Al-Ahly tie 2-2 with Algerian team Union Algiers  in Cairo in the round of 16, and 1-1 with Morocco’s Raja Casablanca. In the same round, Motaeb brought victory to Al-Ahly against Enyimba International FC on their territory in Nigeria.

Motaeb scored five goals in the 2006 championship that have eventually enabled Al-Ahly to take the title. He lead Al-Ahly to victory in the 2013 championship against Kenya’s Tusker FC, and the team qualified for the groups round following his goal against CA Bizertin in the same league.

Motaeb has contributed to Al-Ahly winning ten African titles, five of which were in the CAF Champions League, four in the CAF Super Cup and the latest being the CAF Confederation Cup.