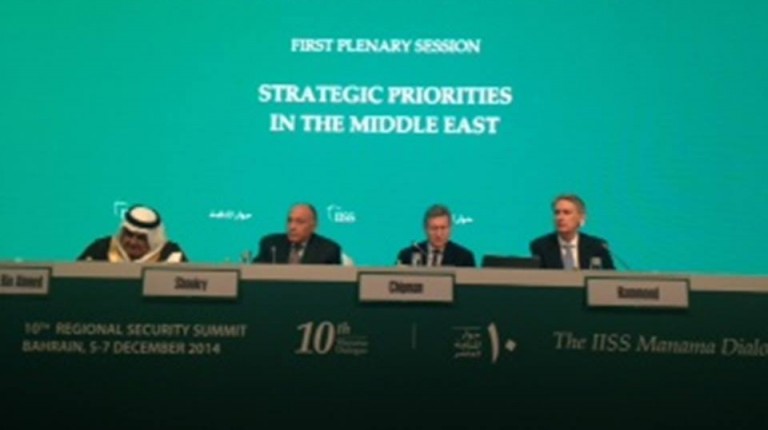 Minister of Foreign Affairs Sameh Shoukry discussed bilateral relations and anti-terrorism efforts with his British counterpart Philip Hammond, on the sidelines of the 10th International Institute for Strategic Studies Manama Dialogue Forum in Bahrain, on Saturday.

Shoukry detailed recent developments in Libya to Hammond following a conference last week in Khartoum between the foreign ministers of Libya and its neighbouring countries.

Shoukry emphasised the importance of supporting “legitimate government institutions” in Libya and backing “the Libyan government’s efforts to restore stability and security in the country”, according to a foreign ministry statement.

Egypt has been supportive of the internationally recognised Libyan government, which is currently exiled in the eastern city of Tobruk. Parallel government institutions in Tripoli are under the control of Islamist political groups backed by heavily armed militias.

The foreign minister’s remarks to Hammond echoed the message of his speech to the Manama summit on Saturday, in which he emphasised the importance of using non-military strategies to defeat terrorism “ideologically”.

Shoukry and Hammond also discussed the prospects for an independent Palestinian state and the impact of Israel’s snap election, called by Israeli Prime Minister Benjamin Netanyahu last Tuesday, in efforts to restore peace negotiations with the Palestinian authorities.

Shoukry stressed that without a peaceful, fair, and comprehensive settlement there would be no stability in the region.

The British parliament voted to recognise an independent Palestinian state alongside Israel in October, though Prime Minister David Cameron abstained from the vote and said the outcome would not change his government’s policy.

According to a statement from the Egyptian foreign ministry, Shoukry will continue his diplomatic trip with a visit to Oman, where he will meet the Omani Foreign Minister Yusuf bin Alawi to cover bilateral relations as well as ways to strengthen ties between Egypt and the Gulf as a whole.