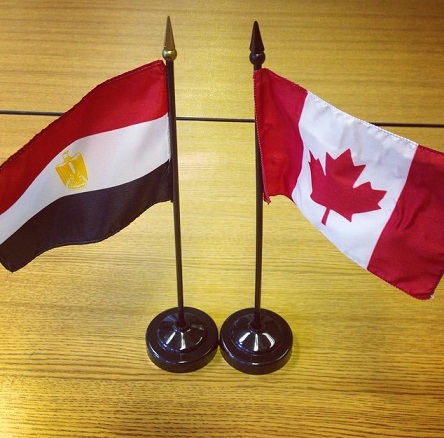 An email sent on Monday morning to Canadian citizens living in Egypt stated that the Canadian Embassy will remain closed over security concerns, a day after the neighbouring British Embassy in Cairo closed for the same reasons.

“The Embassy of Canada in Cairo is closed until further notice for security reasons,” the email reads.

No formal public statement has been issued by the embassy office regarding Monday’s closure and there was no response on the office telephone number. The email, however, asked recipients to “share the… important information with other Canadian citizens in your area”.

The embassy website holds the general statement: “The ability to provide consular services may occasionally be limited for short periods due to unsettled security conditions.”

Meanwhile, the United States Embassy, also nearby in the embassy district of Garden City, remained open on Monday. Acting Spokesman Walter Parrs said that “nothing has changed for us… but it’s hard to predict these things”. Parrs added that travel advice for US citizens remains the same.

In the early hours of the afternoon, the streets were unusually quiet in the Garden City area that hosts the embassies of the United States, the United Kingdom, and Canada, among several others.

“I heard about the other embassies closing… I’m not really concerned but I did think about it coming here today,” said an Egyptian-American man outside the US Embassy, who asked that his name be recorded only as John. “You have to think positive—at least there’s no line.”

Indeed, outside the US Embassy gate there were only a handful of people, whereas on most days there are tens of people in line.

A Monday statement from John Casson, the British Ambassador in Cairo, confirmed the ongoing indefinite closure of the British Embassy. “Public services at the British Embassy are currently suspended. We have taken this decision to ensure the security of the embassy and our staff.”

Outside the embassies of the United Kingdom and Canada the streets were nearly empty apart from security forces.

The area always has restricted car and pedestrian access, with police forces manning checkpoints to enter and exit the area. Heightened security measures included a military helicopter flying low overhead and a greater presence of plain clothes officers in their signature leather jackets, despite a temperature of 24 degrees Celsius. The officers stood around the checkpoints, questioning many of the pedestrians walking by about their reasons for being in the area.

The closures come after Australia officially stepped up its travel warning level for Egypt on Saturday. The Australian Department of Foreign Affairs and Trade stated on its website: “Reports in early December 2014 indicate that terrorists may be planning attacks against tourist sites, government ministries and embassies in Cairo.”

A separate statement on the Canadian government’s travel advice website warns that despite Egypt’s strong security, “a high threat of terrorist activities remains and could affect foreigners… While attacks have mainly been aimed at security forces, their facilities and other government buildings, attacks targeting foreigners cannot be ruled out.”

The warning continues to reference a September 2014 statement from the Islamic State of Iraq and the Sham (ISIS) that encourages indiscriminate retaliation attacks on members of the US-led campaign against ISIS in Iraq and Syria, including Canadians. “Individuals and terrorist groups in the region may be inspired to carry out attacks in a show of solidarity with IS[ISIS],” the advice reads.

Whilst the exact nature of threats to the foreign offices is unclear, an Egyptian source in the security forces told Reuters on Sunday that a suspected militant was recently detained by authorities and confessed to plans to targets foreign embassies.

The increased alerts come despite the Egyptian authorities’ recent attempts to encourage countries to downgrade their travel warnings. In July, several European countries lifted travel bans that had been implemented in February, following a bomb blast on a tour bus in South Sinai, which killed three South Koreans and their Egyptian driver.

Egypt’s most active terrorist organisation “State of Sinai”, which recently changed its name from Ansar Beit Al-Maqdis following its declared affiliation with ISIS, claimed responsibility for the murder of an American oil worker in Sinai in August. The Islamist militant organisation uploaded pictures of William Henderson’s passport and other identification documents to social networking site Twitter.