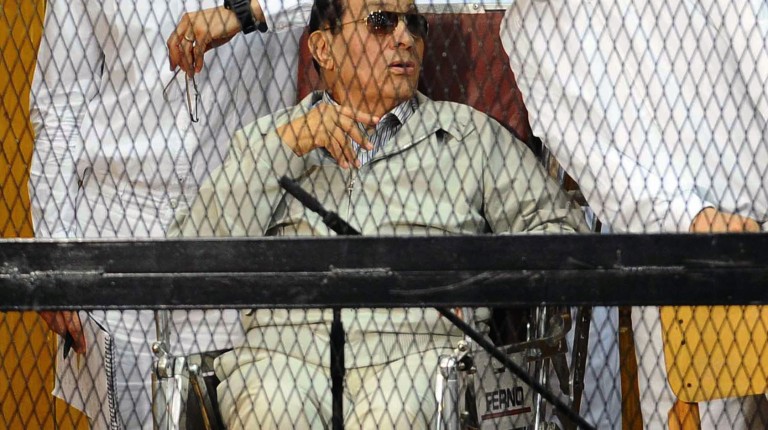 Legal specialists and professors engaged in a debate about the competing narratives defining the trial and verdict of former president Hosni Mubarak, at the Cairo Institute for Human Rights Studies (CIHRS) on Sunday. The discussion tackled the relationship between law and politics, the impartiality of the law, and the gap between law and justice in Egypt, while deconstructing the procedural dynamics of the case.

The event featured three panellists – lawyer and director of the National Group for Human Rights and Law Ahmed Ragheb; director of the civil liberties unit at the Egyptian Initiative for Personal Rights (EIPR) Amr Abd al-Rahman; and Hani Sayed, chair of the Department of Law at the American University in Cairo (AUC).

Although the people demanded many times what they called “revolutionary trials” for the symbols of the Mubarak regime, this was not provided, said Ahmed Ragheb. This was due to the main demands in the 25 January Revolution being justice and dignity, where every human should be tried in front of a court, said Ragheb.

He added that, in the case of Mubarak, he stood in front of a civilian criminal court where a normal trial was set to take place.

“However, the prosecution in all the trials related to killing protesters, not only Mubarak’s, was not given sufficient evidence,” Ragheb said, who added that the Egyptian judicial system, the Ministry of Interior is responsible for providing the prosecution with evidence.

This was not the case however, claimed Ragheb, who added: “Security forces, who are the main defendants in the cases, provided evidence and reports that helped in weakening the charges.”

He added that some evidence was replaced, and “in some instances police officers pressured relatives of the victims to change their testimonies”.

Hence, most of the police officers were acquitted from charges of killing the protesters due to lack of evidence and the “self-defence” argument. He added that other reasons that lead to the mass acquittals are that most of the cases related to the killing of protesters were separated into different districts, cities, and officials.

“If a defendant charged with killing protesters is acquitted, other defendants in separate cases can cite this acquittal in their own favour”, Ragheb said.

Ragheb accused the prosecution of “incompactness” as “they used the same technique to refer all defendants of court”.

“An alternative to evidence were the reports of the fact-finding committee, which mentioned that: the protests were peaceful, and that the state used excessive violence, snipers and thugs and fully equipped squads against the protesters,” he added.

However, Ragheb said the court did not use the reports, citing logistical reasons.

He concluded by saying that the 29 November Mubarak verdict relied on lack of evidence, the fact that the case focused only on the killing of protesters in the vicinity of Tahrir Square, and the reports which argued that Mubarak ordered his officials in the communications, police, and media, to stop the protests, and not “killing them”.

Ragheb added: “There are two ways to counter such verdict, either to rely on the Law 96/2012, ‘On the Protection of the Revolution’ or to await laws to be issued by the ministry of transitional justice.”

He was followed by Hani Sayed, associate professor of Law at the American University in Cairo, who discussed whether there are contradictions between dissent and law.

He explained that the modern political context deals with the post 19th century definition of the state.

Sayed said: “However, everything we understand about law in the modern times comes after a revolutionary mobilisation.” He said this eradicates a judicial system and establishes its own.

“We can’t talk about law without acknowledging dissent. Nevertheless, there is no revolution that can take place within the context of law. Almost all laws limit and abort revolutionary work,” Sayed said. “When a revolutionary succeeds, he has to secure his status and build laws that protect him and the revolution: laws that are set to rule the society in the post-revolutionary era.”

Sayed cited the French Revolution, where laws served the revolution years after 1789.

“The current judicial system, which protects and serves many of the interests and benefits of former regime members,” Sayed argued, made law one side in the conflict in the current Egyptian political scene.

Sayed mentioned that referring the Mubarak case to the criminal court, as well as focusing only on killing the protesters was a mistake. He added that “it ignores other violations: fatal train crashes, high percentages of Hepatitis in the country, and violations in schools and the health sectors”.

Amr Abd Al-Rahman, head of the civil liberties unit at the Egyptian Initiative for Personal Rights (EIPR), had a different take on the verdict. He approached the case by narrating the complicated relation between the democratic forces in the country and the judiciary.

“Although in 2006 the democratic forces, including activists and parties, stood in solidarity with the judges to gain independence, now in 2014 the same democratic current are concerned about the limit to which judges are independent,” Abd Al-Rahman said.

He added that during the last ten years of the Mubarak reign, a slight competition occurred between legal activists, mainly lawyers, and the “old guard” judicial sector.

“The democratic force wanted to have a role in the judicial field, either by updating the legal understandings of family law, human rights, freedom of religion, as well as providing new concepts of individuality and the relation of the individual to the state”, Abd Al-Rahman said.

This conflict, Abd Al-Rahman argued, along with the popular demands to “cleanse” the judiciary, made the “judges felt threatened, where they started to use the independence granted by the 25 January Revolution against the revolution”.

“The reason for this is that since the establishment of the modern Egyptian state, judges self-proclaimed themselves as the leaders of modernisation and enlightenment in the country,” Abd Al-Rahman said.

The status of the judges started to be threatened, and the reaction was that the same “exceptional trials” the revolutionaries were demanding against Mubarak, are now being implemented to go “after the revolution, activists, and members of the Muslim Brotherhood group”, he added.

Abd Al-Rahman concluded that “the Mubarak verdict was an attempt to restore the status of the state, the police, and the Mubarak regime.”