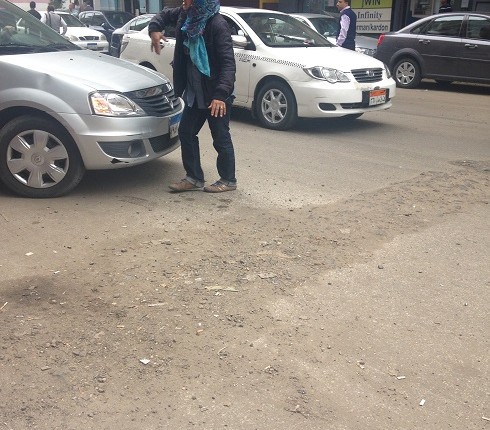 In a gruff voice that any passer-by can hear, she gives drivers instructions to park their cars, walking swiftly back and forth with a nice smile, assuring drivers not to worry as their cars are safe, and she’ll  “keep an eye on them”. Om Heba – as she likes to be called – works as a parking lady.

At first sight, from the number of greetings she receives one might think she’s a public figure.

In the infamous Mohamed Mahmoud Street in Downtown Cairo, is one of the few ladies who works at a job which is socially reserved for males.

“I’ve been working for 22 years now and I raised my four children from the money I earn from this job,” Om Heba says with a glow in her eyes and the hint of a slight smile. Om Heba recalls how she first started working to help her husband, who was working the same job as well. “Any job that allows us a ‘halal’ income is a proper one.”

After her husband became sick, Om Heba continued working, to become the breadwinner of the household, supporting her husband and providing the money for his medication and their livelihood. “I’m the only provider for the house now, and I have to stand by my husband in sickness and health. That was the promise we made.”

The money she earned from her job allowed her to provide all her children with a good education, from the eldest up until her youngest daughter, who is currently a senior year student at a private school.

She doesn’t believe in differences between women and men when it comes to work, and believes that whatever job life forces someone to do should be done well.

“I may look like a female, but the person dealing with people at work is as far from femininity as possible,” she says.

Despite her tough exterior, dealing with people from various social strata all day long is no easy task, and speaking to angry, rude, cursing customers is a part of her daily job, according to Om Heba.

“At any point I could find a man cursing me for no obvious reason,” Om Heba says. “On the other hand, people are usually nice and can’t disguise their surprise when they see me working as a parking lady.”

As for the street that has witnessed so many tumultuous political events over the past three years, she was an “unbreakable part” of it.

“I remember back in the Mohamed Mahmoud clashes of 2011, there was blood everywhere and a lot of people were falling, and I couldn’t just leave them like that and go home,” she recalls. “I will never forget two dead bodies that I saw right near a tree in a corner.”

Yet, Om Heba finds her job very interesting and says she has learned a great number of things from it; patience and staying calm no matter what being the most important of them.

With a wide smile, she concludes saying: “It’s not just a job, it’s a life.”