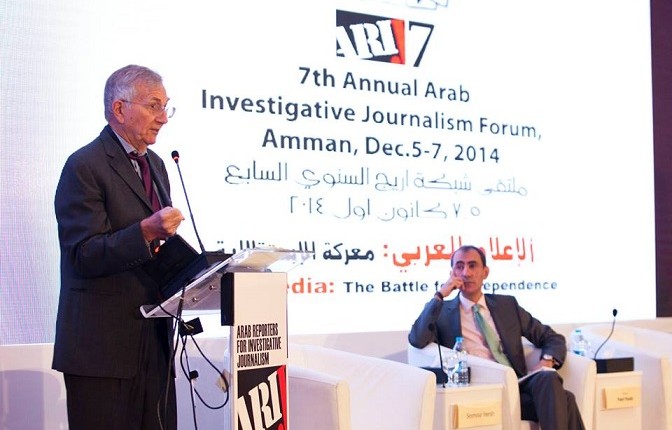 Under the slogan “Arab Media: The battle for independence”, the seventh annual forum for Arab Investigative Journalists (ARIJ) gathered 320 Arab and international journalists  in Jordan from 5-7 December.

The conference held in Amman, launched a group panel discussions reviewing the status of investigative journalism in the MENA region. It also ran training sessions for participating journalists by renowned experts and practitioners from the field.

The panels reviewed in depth the situation in the Egyptian media as one of the countries facing a struggle for independence in journalism. They discussed the security threats imposed on journalists during field reporting, and denounced the detention of foreign correspondents.

He added: “I wouldn’t tell any Egyptian journalists now to do anything but be very quiet.”

“We do not mean anything against Egypt in particular, but it is a big country and that is why it is always our centre of discussions,” said Daoud Kuttab director of the ARIJ network.

According to Al-Kahky, media production in Egypt not only faces threats on the governmental level, but also on the business and economic levels. He added that investigative reporting is the last tool left for print to keep pace with the technology in digital journalism.

Speaking of freedom of speech in Egyptian media, Al-Kahky said his channels were striving to maintain a level of freedom. This, however, provoked many negative responses from the attendees who argued, “we no longer see any good journalists on your channels,” referring to some examples as former hosts Yosri Fouda and Mahmoud Saad.

In October, one of Al Jazeera Arabic’s presenters, Ahmed Mansour, was sentenced to 15 years in prison on charges of torturing and sexually assaulting a lawyer during the 25 January Revolution.

At least 10 journalists have been killed in Egypt since 2011, according to CPJ. This includes six who died in the second half of 2013.