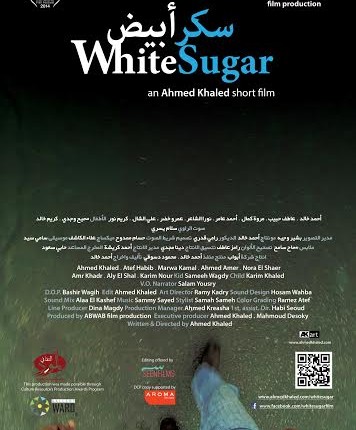 Ahmed Khaled confounds one’s expectations. He is not the dishevelled, neurotic example of a movie director – one who chain smokes frenetically while yelling on the phone. In fact, the Egyptian filmmaker Khaled does not smoke, and he when talks about his ideas, it’s in a calm manner, all while maintaining impervious eye contact.

Khaled’s short film “White Sugar” was selected this year by the Dubai Film Festival (DFF) to compete in the Muhr short competition, a showground for the Arab world’s most talented and up and coming directors. The implications are great for the winning film, qualifying it to be considered for the 2016 Academy Awards.

“White Sugar”, an experimental piece of fiction that explores how dreams intersect with reality, is Khaled’s third short film. He was very hands on during the film’s production and – in true auteur fashion – wrote, produced, edited, and starred in the thirteen minute short.

Before he gets ready to go to Dubai this Wednesday, Khaled sat down with Daily News Egypt to discuss cinema, his career, and what it’s like making films in Egypt.

Surprisingly, Khaled, who has directed a number of documentaries, TV commercials, a few shorts, and the Arab world’s first horror series featuring the actor Amr Waked, did not study film. He graduated with a specialisation in oil painting from Helwan University. Khaled says that he uses both film and painting “to express ideas [he] finds film to be more effective”. It is “effective in reaching more people and, by more people, I mean different kinds of people” adds Khaled. “With painting you find the same kind of people who appreciate it; from one exhibition to another you find the same sorts of people”.

Unlike oil painting, filmmaking is an incredibly collaborative art form, a fact that Khaled stresses.

“I like to work with the most talented people. Even the person who makes the tea makes it the best. So to say one person is more essential than another is not fair. The cast, the crew, everyone has to be essential. Because everyone is working their best in order for everything to work effectively,” says Khaled.

Despite his seemingly methodical personality Khaled is quick to confess that his process and approach differ for each film. Unable to pin-point an exact technique, he says that “something pushes you to make a movie, and then you discover your process and method while making it”.

Though reserved, Khaled admits he is excited to have his short selected by DFF. “It’s nice because the DFF has a huge influence in the region” he says. “It’s nice for the film, the cast and crew to be appreciated”.

When asked what he thought his chances of winning at DFF are, Khaled says it’s going to be “difficult because there are lots of good films in the contest”. He’s read the synopses on the other films and is privy to the other filmmakers’ backgrounds and says that “they are all very good. Honestly, it’s just nice to be in the same conversation as these other films, not competition”.

Khaled becomes especially impassioned when asked about the obstacles an independent filmmaker undergoes in Egypt.

“The biggest obstacle is trying to figure out how to be able to express exactly what you want to say,” Khaled explains. “I’ve made three films. Two of them have been banned. In order to make a film that will be screened in Egypt you have to first be in contact with the cinema syndicate and you need to obtain a censorship licence – and it’s not easy to get”.

Khaled goes on to say that, once a script has been reviewed for censorship and a license is obtained, “you need to get a special permit from the police to actually be allowed to shoot the film,” which Khaled says is a hard process because the police do little to help with filming in the street.

Once the film is shot, “it needs to be reviewed again to make sure that you actually stuck to the censored script”. He continues to say that “all of this costs a lot of money; that the whole system can be corrupt and the systems dealing with art [in Egypt] is killing the art itself”.

Other than dealing with the bureaucratic hurdles to get a film screened in Egypt, Khaled also takes issue with the country’s critic culture. He feels as though there is a serious lack of qualified film critics. He says “too many newspapers seem to be more concerned with filling up their white pages than actually critiquing”.

When asked what drives him to make films Khaled answers “you can’t wait for something to drive you, you have to just start”. His motivation though is “passion to communicate through art so I can make people think. Thinking is very important. My goal is to make people think is different ways. The truth can have a lot of faces”.

“White Sugar” is slated for its world premiere on 14 of December at the Dubai Film Festival. The 11th DFF runs from 10-17December.