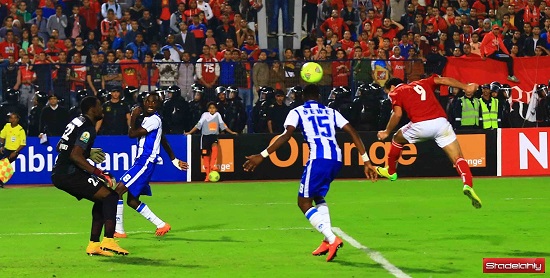 “Master of the world” – if you ask an Al-Ahly football club fan about this phrase, he will answer in a fraction of a second saying “We, Al-Ahly, are the masters of the world!”

The world of football is indeed a strange one, and one cannot understand or comprehend all of its secrets. The Cairene team may be the most powerful of the Egyptian football teams, their undisputed leadership, and perhaps has even earned the title “King of Africa” after recently winning the African Confederation Cup in a final that shook the continent. Al-Ahly have gained the respect and appreciation of FIFA and many of its rivals in the FIFA Club World Cup over the years, for the team’s courage in the face of bigger teams, as well as its receiving a bronze medal in the Club World Cup in 2006.

Al-Ahly become one of the most successful clubs in the world in terms of the number of championships won, with 129 official championships under its belt – a number that has not been surpassed by any other team in the world. Al-Ahly also has the most continental wins following the African Confederation Cup this weekend, with a total of 20 continental championships titles. This helped widen the gap between Al-Ahly and Italy’s AC Milan and Argentina’s Boca Juniors, both of which hold 18 international titles.

That is the truth now, as Al-Ahly succeeded in winning over Ivory Coast’s Séwé Sports in the final of the African Confederation Cup through one goal by striker Emad Moteab. Al-Ahly fans roared inside and outside the Stadium after a long absence , and the red flares ignited with joy and fireworks exploding in celebration of the 20th championship title in Al-Ahly’s international history. After the away game ended with a 2-1 defeat for Al-Ahly, the team needed 1 goal to be crowned; in the end, Al-Ahly won.

History shows that this is not a strange thing for Al-Ahly; after all it is the miracle team after it recently managed to win two titles, the 2012 and 2013 African Champions Leagues League, at a time when there were no local Egyptian sports activities, and amidst a political crisis that strained the country but failed to weaken the Red Devils. The team added titles for the African Super Cups in 2013 and 2014 to this list.

For this, Al-Ahly managed to win all tournaments to achieve the impossible again this year, despite the retirement of key players like Mohamed Aboutrika, Wael Gomaa, and Mohamed Barakat, while others were absent from the pitch due to injuries or transfers. On top of this, managerial staff underwent various changes and the old board was replaced following a fierce election a few months ago, fans were not allowed in the stadium, and many players were struck with medical crises which forced the management to dismiss the head of its medical department. However, that did not stop Al-Ahly from gaining its third African title in a row after winning the Egyptian league  last season.

Al-Ahly continued to break records for Egyptian, African, and international football and with its new Spanish managerial team headed by Juan Carlos Garrido to win the Confederation Cup, which had completely eluded any other Egyptian team to the extent that Al-Ahly’s compatriots, Ismaili, was able to reach the final in an older version of the tournament under a different style and system. They were still unable to gain the title, with Al-Ahly becoming the first African team to succeed in winning all tournaments on the continent.

Al-Ahly holds eight titles within the African Champions League, having won the first 1982 and the most recent in 2013, four titles with the African Cup Winners’ Cup, having won three times in a row in 1984, 1985, and 1986 with the fourth win in 1993, in addition to six titles for the CAF Super Cup, the first in 2002 and last in 2015. Al-Ahly also recently won the Afro-Asian Club Championship and the Confederation Cup.

One the difficult final was over, the question asked by Al-Ahly fans and quoted on the social media is “When is the African Super Cup? We are waiting to take the 21st international title!”