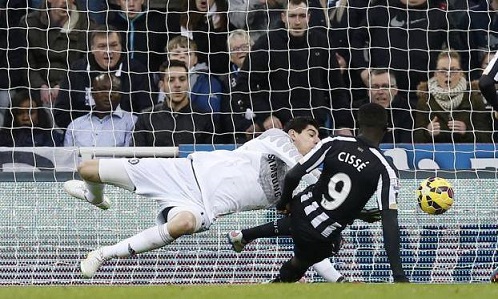 final round. It started with a competition between Newcastle United and Chelsea, where the former delivered a surprise result. Newcastle United (9th place prior to the 15th round) won against the hosting team, Chelsea (1st place in the league), 2-1, and the latter team could not move beyond this defeat, even with such a strong team and coach. Newcastle is now in 7th place, while Chelsea remains on top with 36 points.

The defeat triggered more competition when 2nd-placed Manchester City  won against hosts Everton with one clean goal by Yaya Touré through a penalty kick in the middle of the first half. This made the 1-point difference between the two teams become 3 points, with Everton retreating to 12th place with 18 points.

The surprises of the 15th round continued with Arsenal’s defeat by Stoke City 3-2, representing the toughest game this week. This marked the 4th defeat for the defence players in the Premier League this but did not affect the teams’ranks, allowing Arsenal to stay in 6thplace and Stoke City in 13th place.

Hull City stayed in 18th place after tying with West Bromwich Albion, which barely 16th place. Meanwhile, Burnley dropped to the 19th place, just one ranking before last, following a defeat against Queens Park Rangers 2-0. Leicester City remained at last place in the league for the third consecutive week after losing for the eight time in the last 10 games.

This round witnessed 21 goals, 14 of which were scored by the hosting teams, and seven goals scored by teams outside their playing field. The most intense periods of the games were between minutes 60-75, where nets were shaken by six goals.

Seven games ended with one team winning, against only three negative ties. This round did not witness major wins for any of the teams, while the competition rises more each round as we approach the middle of the local season for the English Premier League.

Referees raised 45 cards, 40 of which were yellow and five red with three penalty kicks counted during the 15 rounds of the Premier League.